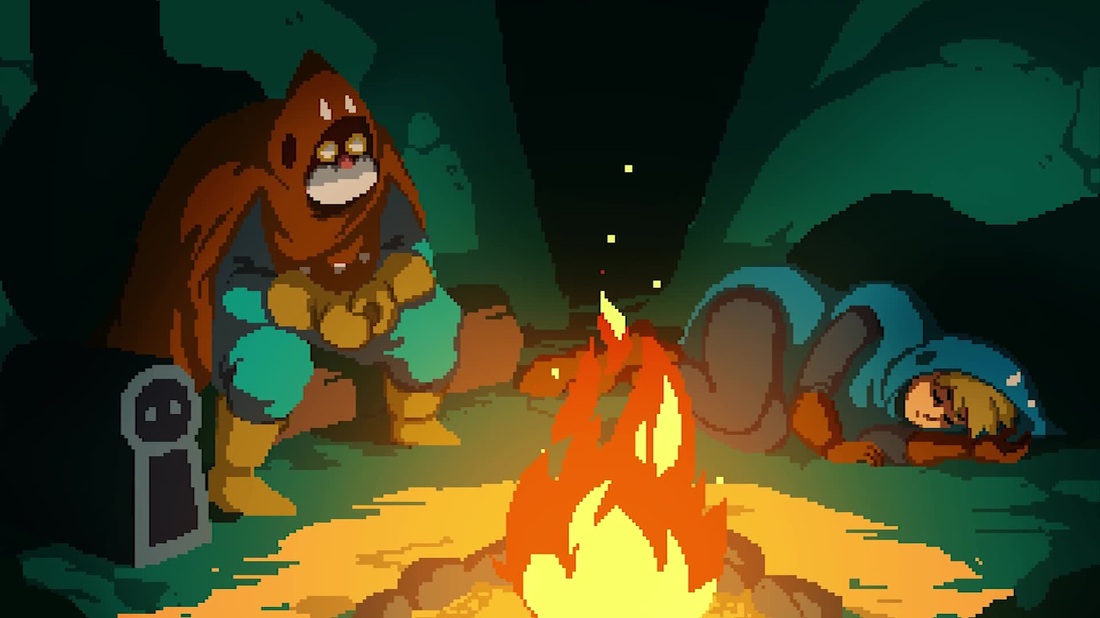 Paying homage to the 16-bit era of video games isn’t exactly something unheard of in the current indie market. Many games are lining up boasting beautiful pixel art and retro-inspired gameplay infused with modern design sensibility. But just because a well has been drawn from frequently doesn’t mean the water is any less tasty, nor does it mean that you can’t still occasionally pull up something refreshing and new.

Aegis Defenders, on the surface, appears to be another side-scrolling action-adventure game akin to a Metroidvania with detailed backgrounds and pleasant sprite work and animation. And while this is certainly true, it’s the unique blending of genres that makes it stand out amongst the crowd. Claiming itself a “Tactical Platformer”, Aegis doesn’t just seek to offer the exploration and adventure, but also looks to melt some tower-defense inspired elements on top to spice up the formula.

With such an ambitious combination of elements, I decided to reach out to the team at GUTS to learn more about the game and it’s expansive universe and unique development focus.

“The game at its heart is an old-school, 2d platformer that you may have played back on the SNES. We love those games, but we thought how cool would it be to combine with modern game mechanics. Tower Defense, which is newer game genre and typically resonates a certain type of imagery and gameplay, has been very interesting to us as gamers. The idea of having to fight off waves of enemies while protecting an object is pretty cool and can really fun. So we have implemented the idea of defending certain points and applied it to a puzzle-platformer. You need to figure out ways to defend your “tower”, while using the skills, items and objects you have obtained throughout the game. You also have the ability to switch between your two characters between the game (ala Lost Vikings). Bart is an engineer, he builds, turrets defense blocks and robots – He falls into the tower defense world a bit more. Clu is a hunter, she is essentially a mega-man type character, which represents the platforming world. Using the two of them together, creates an all new unique experience for the player. It then becomes a puzzle game, so to speak, in trying to figure out who you should use in what type of situation. In terms of the overall game play, generally levels will consist of platforming through levels, solving puzzles and then finding the characters in situations that could be considered tower defense combat.  In the end, we like to think out game is a Tactical Platformer.”

The character design and the unique characteristics of Clu and Bart is a great starting point for looking at how the game seeks to mash-up genres and play styles. With Bart more focused on the tactical trap-setting and defense building of the tower defense genre and Clu being used as more of an up-front attacker, you can see how jumping between the two in the heat of battle can switch-up your approach to conflicts easily on the fly.

Aegis appears to be building itself around an expansive universe and well thought-out lore. Originating as a graphic novel, Aegis Defenders tells the tale of Elam, a world of ruins and lost technology. The story and it’s concept design remind me of Final Fantasy VI in a way, while staking out it’s own unique territory in the past-and-present collision theme. With forces seeking to use the lost technology in dangerous ways, the stakes are high for the two main characters. How the story plays out, and how their personal struggles in this world develop have all the makings for an engaging story built inside a world that is both beautiful and threatening.

“Aegis Defenders takes place in the world of Elam, which is quite similar to Earth. Elam has advanced so far into the future that the world is once again in the dark ages. However, now there are remnants of ancient technology (or what would be considered our future technology, weaponry, robotics). So there are these ancient artifacts that are found all over the world. Our protagonists, Bart and Clu, a team of excavators, find Aegis, which is a giant robot said to bring uncontrollable power to those who wield it. They hope to power up their God in order to protect their village from Shem, another robotic God. Its a really neat take on fantasy and sci-fi, while remaining grounded.  Interestingly enough, myself and Bryce Kho – the game designer and artist met in graduate film school. Bryce started taking classes in game design, he paired up with engineer Li-fu Lin and started work on Aegis Defenders. Bryce, both an artist and story-teller, had originally been working for sometime on Aegis as a graphic novel. However, after learning he could actually create games, he felt the best way to tell the story of Aegis Defenders was through video game. So the game has a rich story and will follow the relationship of Bart and his Granddaughter Clu as they attempt to turn on Aegis.”

Designing such a world would require a good attention to storytelling and world design, and that’s where the art comes into play. We’ve seen many games design incredibly detailed worlds with pixels, and Aegis Defenders is no different. Sporting some unique visuals, what I’ve seen so far has gone a long way towards installing my faith in the execution of such a robust mythology. Blending lovely environmental designs with detailed ruins and technology long since reclaimed by nature, it’s impressive just how varied the screenshots I’ve seen have been. I mean, just LOOK AT THIS!

I’m also drawn in by the animations of the characters and the enemies you’ll face. The large-scale boss fights shown so far in particular impress me by being intimidating, but also very different in their approach. It looks like you’ll have to use both your action-oriented skills as well as forward thinking in terms of planning out tactics and traps for each encounter in very different ways, with one encounter placing you on what appears to be flying hovercraft of some sort fighting off a slime and the next pitting you against blind worms that burrow under the sand. Also, a giant spider. Because I didn’t deal with that enough in Limbo!

Aegis Defenders has launched on Kickstarter today, with it’s first focus being PC/Mac, including Steam Greenlight campaign, with consoles being approached as a stretch goal. If you’re into genre-blending retro-homage games with a heavy focus on mythology and deep world building, this one is game to be excited for. For more information, including a ton of pictures (and animated gifs which show off some incredible art and animation work), be sure to swing over to the official Aegis Defenders website as well. Thanks to Brian Ott for answering my questions and filling in some details on this excellent looking game.

What? You want to see more? Then check out the launch trailer to see this gem in action!