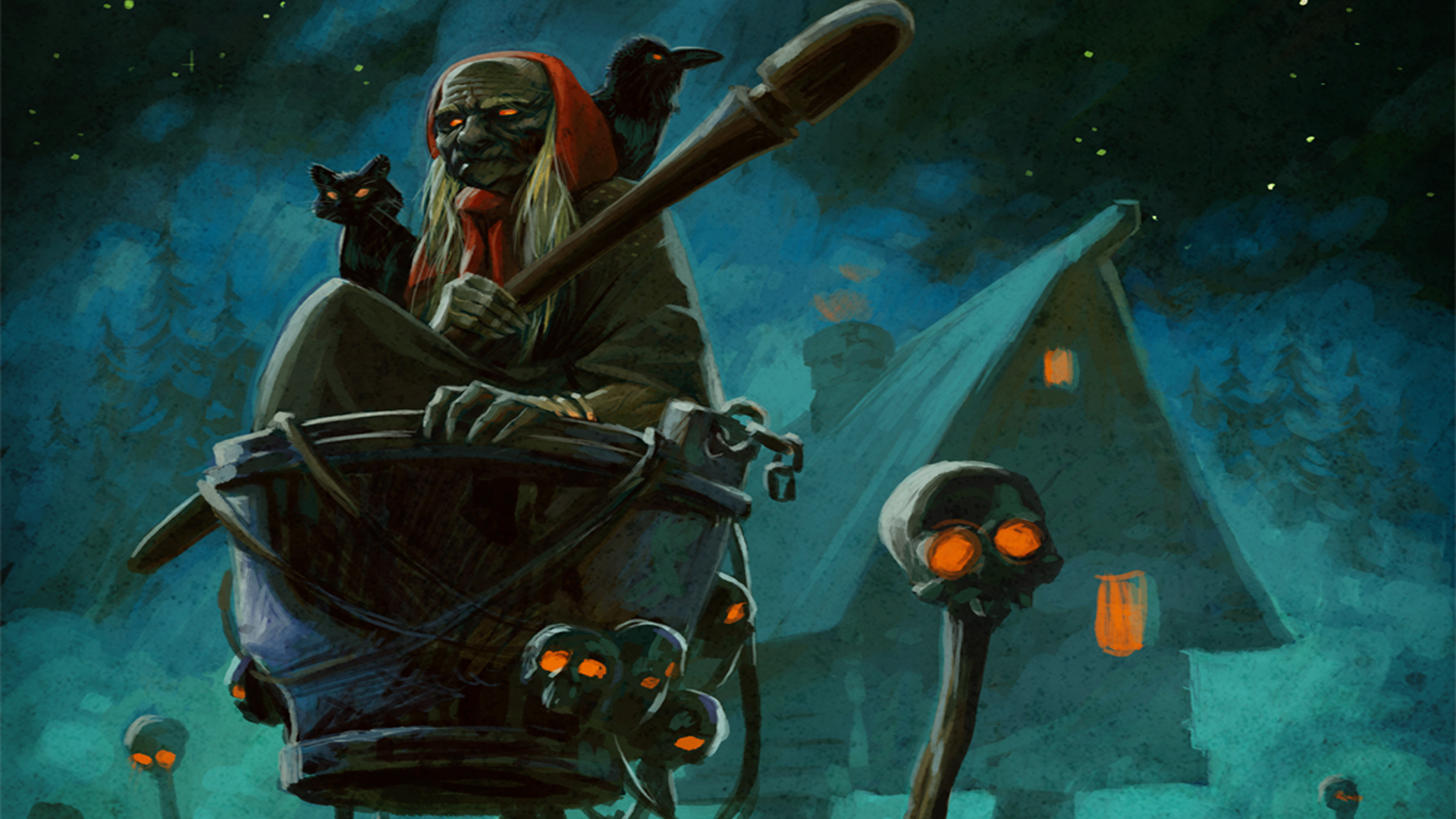 Ah, spring, a time for blooming flowers and April showers and – witches? April 30th, for those not in the know, isn’t just May Eve. In German it’s known as Walpurgisnacht, meaning Walpurgis Night (named for an 8th century abbess). Also known as Hexennacht, or Witches’ Night, it sits directly opposite Halloween on the Gregorian calendar. It is said to be the date of the witching world’s annual springtime bacchanalian rendezvous, held on the highest peak of the Harz Mountains in Germany.

What does all of this have to do with video games? Well, it turns out Germany isn’t the only place to find a plethora of witches tonight – they’ve become as prolific in the digital realm as they are in the real one. A full list of all the witches in gaming would take several Walpurgisnachts to compile, much less read, and who has time for that when there are hexes to cast and bonfires to light? Since three is, after all, a magic number, here’s a look at the virtual incarnations of three of the most mythical witches in the world.

A hipster of a witch long before hipsters were invented, Baba Yaga found broomsticks too mainstream for her taste. Her preferred mode of transportation consisted of a flying mortar, and rather than a wand she wielded a large pestle. Her home is described as being equally strange: a hut in the woods supported by chicken legs.

As the archetypal hag, Baba Yaga is often depicted as a deformed, skeletal creature with iron teeth and a voracious appetite. In some versions she was actually a trio of sisters sharing a name. A witch of ambiguous morality, she seemed as likely to help as to hinder whatever fool crossed her path, and she had a n**** habit of snacking on human offspring. On the other hand, woodland creatures held a special place in her gnarled old heart. She is sometimes called the Forest Mother.

In video games, her maternal qualities tend to be ignored in favor of her ferocity and bottomless pit of a stomach. In The Road Not Taken the player fights to save a group of children from being tossed into Baba’s boiling cauldron. The flavor text of her Cabals card hints at both cannibalism and an excellent sense of smell. Though rarely the main antagonist (with the exception of Sierra Entertainment’s Quest for Glory: So You Want to be a Hero and Barbara Jarosik’s Baba Yaga), when Baba does appear, it’s usually to terrorize the player, as in Shadow Man: 2econd Coming and Monster in My Pocket.

Her Castlevania: Lords of Shadow manifestation hits much closer to the original mark. Though the only thing less appealing than her grotesquely decorated physique is her demeanor, Baba appears to be a woman of great wisdom (if not straightforwardness) who was once quite beautiful. The blue rose she asks Gabriel to fetch is plucked straight from folklore, in which many a knight sought Baba Yaga’s counsel even in spite of her wicked cravings.

Known by a dizzying multitude of names, including Morgaine and Morgana, Morgan was a powerful, otherworldly sorceress and the half-sister of King Arthur of Camelot. She harbored a deep hatred for Queen Guinevere, due to the queen’s interference with a love affair of Morgan’s. She is primarily known as the Camelot’s most dangerous enemy. However, Morgan’s morality is even more of a gray area than Baba Yaga’s. In addition to dark magic and shape shifting, Morgan possessed restorative powers, and is said to have healed Arthur of grave wounds on the isle of Avalon.

When it comes to witches in gaming, it ain’t an Arthurian adventure if it ain’t got Morgan le Fay. Since her appearance in King Arthur’s Quest in 1984, this legendary enchantress has manifested herself in a multitude of video games, including Spirit of Excalibur, King Arthur and the Knights of Justice, Time Paradox, Arthur’s Knights: Tales of Chivalry, and Runes of Avalon.

As in legend, so in gaming: in all of these titles and more, Morgan plays the lead villain, seeking revenge against (or to rule over) Camelot and its monarch. However, rare examples of Morgan’s better nature do exist. In Electronic Arts’s Swords of Twilight, Morgan is Avalon’s benevolent queen, and in Tears to Tiara, she is Arthur’s friend and protagonist Arawn’s wife. Dark Camelot (the unfinished game that would eventually transform, as if by magic, into Thief: The Dark Project) took a more radical approach, f******* the entire mythos. Arthur became a tyrannical ruler advised by the mad mystic Merlin, while Morgan served as a prime ally of the hero, Mordred.

An enthralling figure as ancient as the Dead Sea Scrolls, Lilith’s name has become synonymous with “temptress.” The meaning behind her moniker, however, betrays a monstrous nature – “Lilith” translates to something like “night monster” in English. In Jewish tradition Lilith was Adam’s first wife. After he attempted to force her obedience, she abandoned him, choosing instead to consort with (and give birth to) demons. In the Bible she appeared briefly as a demon herself, and Michelangelo once painted her as a captivating woman-snake hybrid.

Whether demonic or human in nature, Lilith has always been a tantalizingly striking witch. In Faust, Mephistopholes calls her “the Pretty Witch.” Likewise, in Dante Gabriel Rossetti’s “Lady Lilith,” she is “the witch [Adam] loved before the gift of Eve,” and her overwhelming beauty is a trap to snare unwary men.

Of all the witches in gaming, Lilith is by far the most frequently and overtly sexualized. In the classic Castlevania series, she appeared (most of the time) as a monster disguised in a lithe female form. In Darkstalkers she is a succubus. In Diablo she is the queen of the succubi. In Darksiders I and II she is the seductive “Demon Queen, bride of Lucifer.” DmC: Devil May Cry has Lilith in an ill-fitting human guise tending the bar of Dante’s favorite nightclub, while Final Fantasy has two separate incarnations: a snake demon called the Lilith in FFIV, and Lady Lilith, the scantily-clad redheaded villain of the FFXI expansion Wings of the Goddess. In The Secret World she is the mother of monsters – specifically werewolves and vampires. Even in Borderlands: The Pre-Sequel, where she appears as a protagonist for a change, she retains her sensual side: this Lilith is of the “Siren” class and hails from the planet Dionysus.

Animamundi: Dark Alchemist tells a slightly different story. Here, Lilith appears as a child, the main character’s fragile little sister. The action starts with her apparent death by decapitation when the locals learn she’s a witch. The hero discovers that Lilith’s head, however, is still aware (and quite talkative) – and thus begins his quest to alchemically restore her body. Even as a child, this Lilith appears less than innocent. When she still had a body, she dressed in red and black Gothic Lolita attire and summoned demons in the basement in her spare time, in spite of her frail health. It just goes to show you — you can’t keep a good witch down.

A fun, final fact with which to fill your parting glass: Lilith was also the name of a computer built by Niklaus Wirth and his team at ETH Zürich in the 1970s. Lilith computers were used by ETH for nearly a decade before being replaced by a more powerful computer. Lilith’s successor also happened to share its name with a magical being – Ceres, Roman goddess of motherhood and agriculture.