Fantasy is No Longer Fantastic

The definition of fantasy according to dictionary.com is “imagination, especially when extravagant and unrestrained.” Unrestrained is an interesting word because the modern fantasy setting used by games is anything but. When you play a modern fantasy game, is there anything in the game that seems unrestrained to you? Is there anything in the game where you stop to take in the fantastic sights you are seeing? I highly doubt this happens often, if at all. I know when I play a modern fantasy game, I have a mental checklist of fantasy tropes to see how many the developers included.

The problem is an over-reliance on tropes popularized by Tolkien and now a Tokienesque world is fantasy. What used to be, “Dwarves?! Dragons?! Elves?! I am so excited to play this game!” has turned into, “Dwarves? *yawn* Dragons? *old news* Elvzzzzzzzzzz.” There is nothing wrong with using the Tolkien template for a fantasy game, but developers could do something different with the already established tropes. Dragon Age: Origins was a game that used the Tolkien template, but did enough things different or interesting to be more memorable than most fantasy games. Just the simple changing of Elves from noble, pretentious creatures to a race afflicted by poverty and treated with disdain was unique enough to be memorable. But the qunari, Shale, the Fade, and  so much more really set the game apart from most fantasy games.  Just changing the designs of monsters and adding the color to the world can make the world memorable. 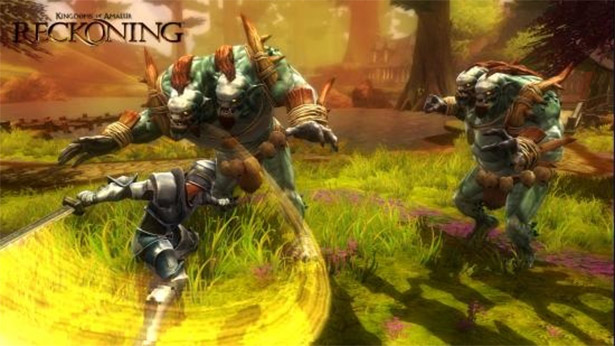 More developers seeking to make fantasy games should take notes from From Software’s Souls series. Specifically Dark Souls. (I have nothing against Demon’s Souls; I simply have not played it as much as I have played Dark Souls. ) The world of Dark Souls is a dark fantasy world set in Lordran, but the world is unlike anything in gaming. Granted, there are some enemies and things you have seen before (skeletons, rats, dragons, wild boars, etc.), but Dark Souls does enough differently and has so much that you have NOT seen to more than compensate for the inclusion of rats.

One of the main things is the world itself. Lordran is an open world, but unlike Skyrim where many areas blend together, Lordran is divided into areas and each area has its own unique flavor, look, and enemies. Darkroot Garden is a luscious forest full of life. Blighttown is a poisonous mire full of dilapidated structures and swamplands. Lost Izalith is a ruinous place overrun with lava and overgrown, decapitated, and decomposing dinosaurs? H***, I have no idea what these are.

Since each area has a distinct feel and look, the designers were able to imbue life and make each area feel vibrant, even if it is desolate. The areas are full of rich colors. It really is amazing just how much the use of colors aids in making a difference in immersion. The architecture of each location also lends each area a distinct appearance. Anor Londo is a pristine city with rising towers and dizzying heights. The Duke’s Archives is actually a gigantic castle the player can explore. Sen’s Fortress is a bleak, oppressing fortress filled with booby traps. Using vibrant colors and different architectures really makes each area feel different from where you just explored.

Another area From made huge improvements was the enemy designs. There are many beautiful, disturbing, and twisted enemies infesting Lordran. For every enemy you have seen before, the game throws five at you that you have not. Just take a gander at some of these creations below.

The enemy design is just magnificent throughout the adventure. Still not convinced? Alright, watch this and then we’ll talk.

Yes, that is indeed a zombie dragon that has been split down the center and has teeth where the ribs used to be. I rest my case.

While not every fantasy game should follow the Souls example, the aesthetic would not work for every project, developers should strive to differentiate their games from the template that has been done to death too many times. Whether the change be aesthetically, thematically, or narrative related, a change is needed. Fantasy games should be fantastic, over-the-up, and overflowing with creativity and extravagance.   Fantasy games should elicit wonderment from the player who is being awed like a small child. As much as I love seeing dwarfs and elves in my fantasy games, I do not miss them when I become immersed in the world of Dark Souls. It is time for a change and for developers to bring more creativity to the fantasies again.

3 thoughts on “Fantasy is No Longer Fantastic”