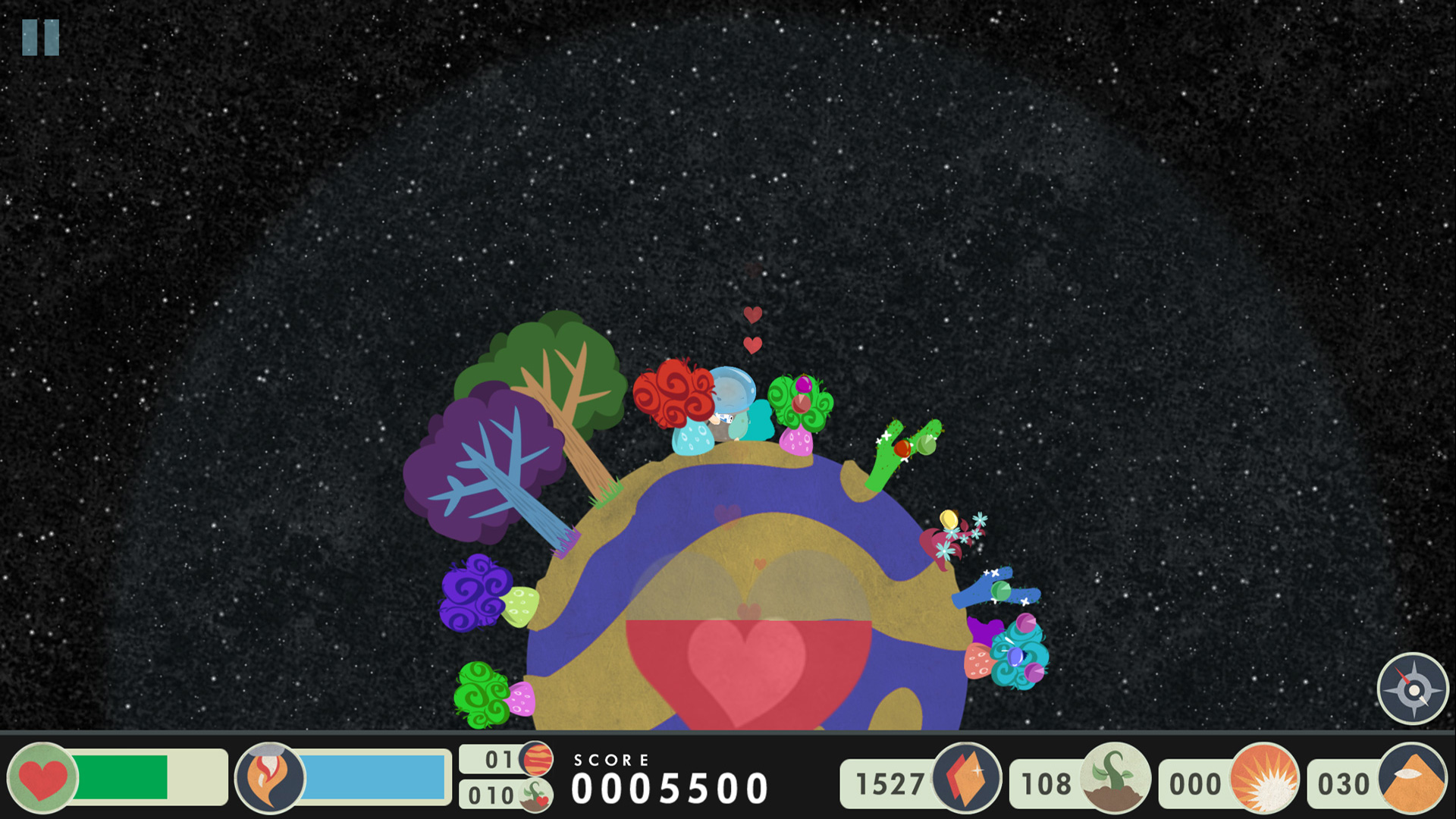 There is no way to say the following sentence with a straight face, let alone read it in a straight face, so I will just let you take it in. You see, in Nate Schmold’s Cosmochoria, you play as a naked cosmonaut who has put the job upon himself to repopulate dead planets with plantlife, Illuminati pyramids, and Easter Island statues that fire at attacking aliens. Essentially, Cosmochoria is a hybrid of Orcs Must Die!, Asteroids, and Super Mario Galaxy.

No this is not a joke. It is however a surprisingly enjoyable little Early Access title out on Steam. I got a chance to play around with the game and while I definitely see room for improvement, there is a certain satisfactory feel to Cosmochoria that is hard to find in most games. Absurd as it may be, it remained a delight during my time with it.

When you start out in Cosmochoria, you’ll notice that there are progress unlocks. Similar to Orcs Must Die! and several rogue-likes, after every life you’ll be able to collect and spend any experience points you earn. These range from simple upgrades like new and more powerful weapons, to more esoteric such as blocks and cosmetic upgrades such as costumes. It still feels like it could lean less on the grinding side of unlocking, but I’m sure this will get tweaked as the game proceeds towards release. I’ve also seen games with far more easily attainable upgrades burn out faster for replay value, so there may be some wisdom to the more grind-centric unlock system.

Once you’re in the game, you start off on a random planet/moon with just enough seeds to start planting new flora. As you progressively grow more plants, they will drop seeds you can use to further populate the planet. Generating an atmosphere will give you a temporary healing buff, which comes in handy once aliens begin to attack. They’ll fly in on their saucers, taking pot shots at you while you return fire. The combat itself is nothing special but works well as a distraction while waiting for seeds to drop from plants.

After you’ve successfully revived your current habitat, you jump off with your jets and fly headlong through space to the next one. These can be nearly as small as you or gigantic in size, but there’s one aspect that can be a bit unnerving. You see, you also have to spend seeds to unlock defensive structures such as the Easter Island Head auto-turrets. Except, by all appearances, plants only seemed to give me seeds once in a while. So despite progressing further along, I was always afraid to upgrade my planet with more than two towers in fear that I wouldn’t have enough seeds to populate the next world.

Then once you’ve begun on your quest to repopulate the cosmos without a pair of pants, a giant dragon will come out and attack you as an impromptu boss battle. If you don’t want to engage in this battle, expect a short life as he will devour whole planets behind you and make sure that you are also on the menu. Life in Cosmochoria may be weirdly beautiful, but it can be quite challenging if you give it the chance.

My time with Cosmochoria was brief, and I do plan to go back once again as it nears release, but as for right now, it’s a neat little game. The art direction is suitably styled in a vein similar to but distinctly different from The Floor is Jelly meets Adventure Time. There’s no real story but really I don’t think this is the sort of concept that would beget a core narrative. If you like the sound of a crazy naked cosmonaut gardener fighting space dragons, be sure to check out the game’s Steam page.