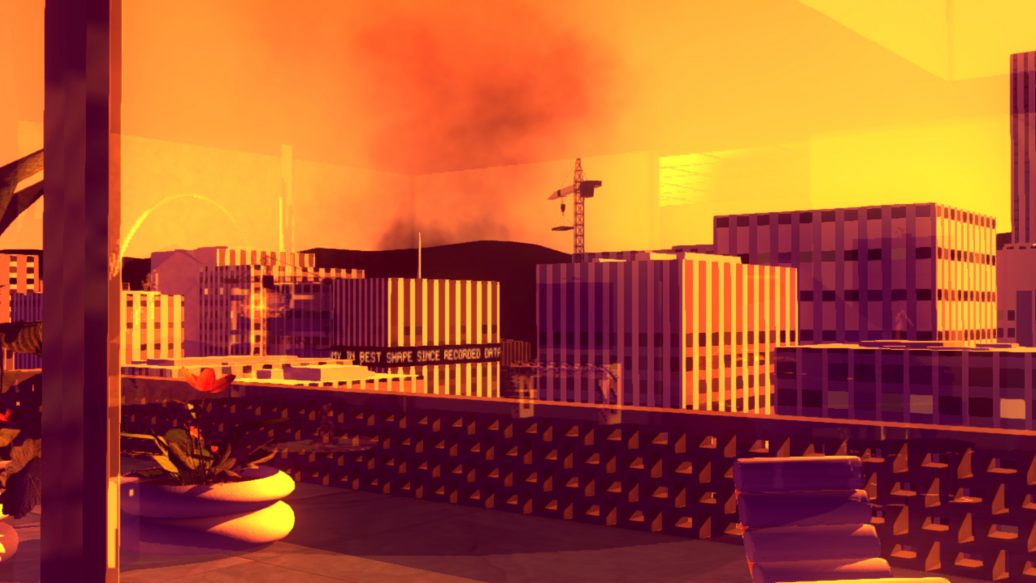 In the fictional equatorial city of San Bavón, Anchuria, sunset is at 6pm year-round. Every day ends at exactly the same time – and in exactly the same way, at least for Angela Burnes. An American tourist trapped in a politically unstable foreign land, Angela has been hired by the ridiculously rich Gabriel Ortega as housekeeper for his snazzy new penthouse. Arriving always at 5pm, she has one hour to complete her work before sunset. The question is, is her limited time better spent completing her tasks and getting to know her enigmatic employer, or keeping an eye out for information concerning the slow-brewing rebellion stirring up outside the walls of Señor Ortega’s stylish refuge? 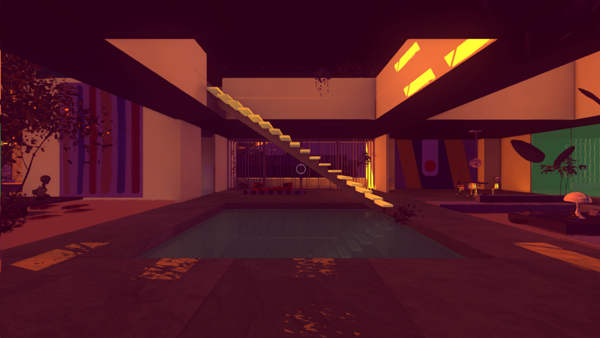 Like Doctor Who’s TARDIS, Gabriel Ortega’s penthouse is bigger on the inside.

Throughout Tale of Tales’s Sunset, the player is presented with binary choices which will, ostensibly, affect how the plot progresses. These choices range from the most basic – should she do her work first, or play piano? – to slightly more nuanced options, defined by the game as either “neutral” or “warm.” Warm responses add flirty flair to Angela’s actions and spark intimacy between her and Señor Ortega. Neutral responses reflect a highly professional, sometimes rather cold, attitude and more sympathy for the rebel cause than Ortega’s love of art.

Unfortunately, what sounds on paper like one heck of a political thriller (or at least an interesting love story) falls somewhat short of “thrilling” in practice. The binary nature of in-game decision-making, as well as the clearly-marked distinctions between what Ortega would perceive as inviting or distant gestures, strips away the potential for what could have been an interesting moral and emotional experiment and leaves the player with basically two choices: to woo or not to woo.

Then there’s the lack of any palpable consequences for one’s choices. Stealing change from countertops won’t get Angela in trouble, nor does Ortega seem to take open offense to even her most brutally honest criticisms. Even if Angela consistently fails to complete any actual work around the penthouse, she never gets kicked to the curb, or even sternly lectured, for her neglect. Even cultivating a relationship – or a lack thereof – between Angela and Ortega has surprisingly little impact on the way the plot develops. 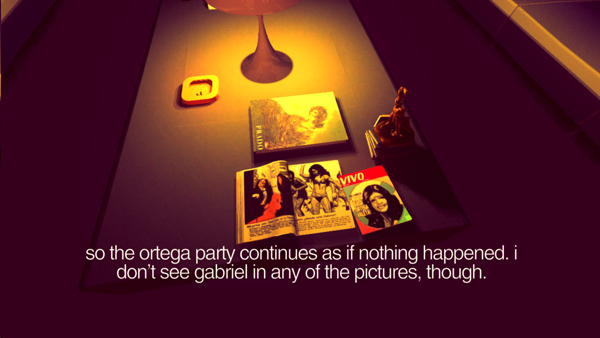 Gabriel Ortega is… the Invisible Man.

Sunset also fails to transfer the implications of the player’s choices to Angela’s attitude. Pursuing romance from the start does not make her narration any kinder towards Ortega in the beginning, nor does continually giving him the cold shoulder keep Angela from speaking fondly of him later in the game. While exploring the split between player intention and character agency could be intriguing when done properly, in the case of Sunset the contradiction is unintentional and only serves to add to a long list of flaws.

Worse still is the simple truth that one path is unambiguously better than the other. There are no hard choices in the world of Sunset. Getting into Ortega’s good graces means access to more information, both about Ortega himself as well as what’s going on in the rest of the city. It also means more handwritten notes to respond to (these were honestly one of the major highlights of the game for me), and (arguably) a more satisfying ending. Staying aloof gains Angela nothing but a shorter, less fulfilling experience and an even greater sense of just how meaningless most of her choices are in the grand scheme of things. 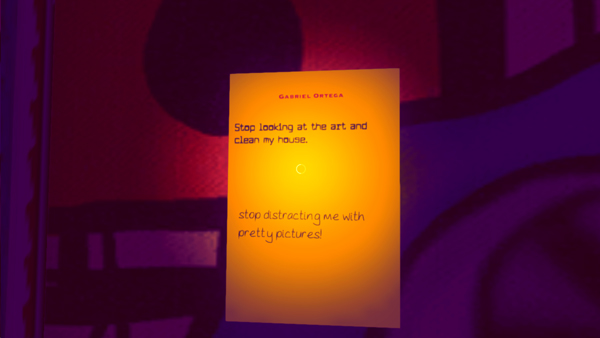 Does Ortega type out each and every random note, or does he just have really robotic handwriting?

While the basic story is actually fairly interesting, all the tension of heightened security and impending anarchy in the city is lost in Ortega’s secluded little sanctuary. No matter how hard Angela tries to convince the player to empathize with her fears and fury and even her tears, the absolute lack of engaging action or even interaction with other characters works like a heavy sedative, preventing the player from feeling much of a connection to anyone or anything in the game, Angela included. Though there are one or two minor jump-scares due to sudden, unexpected loud noises in the house (and one genuine attempt at suspense when Angela arrives to discover Ortega’s private palace has been intruded upon), the monotony of Angela’s typical workload tends to quickly dispel any real sense of tension, or even anticipation.

For all of Sunset’s narrative and gameplay-related shortcomings, however, there is certainly something to be said for the visual design. Just like a real sunset, the colors are extraordinary. Living, breathing, vibrant hues of tangerine and violet paint as 70’s a setting as a disco diva could ask for. While the interior lighting leaves something to be desired – some lamps are too bright, others not bright enough, and a few glitch and don’t work at all – the view from the balcony is always killer, and watching the sky catch fire and the shadows stretch across the floor as the sun sets is sometimes the most exciting part of Angela’s day.

Sunset’s unique setting is equally stunning in its unexpected complexity. Through admirable attention to detail in the form of artwork, radio broadcasts, “traditional” music, religious references and more, the fictional country of Anchuria becomes strikingly convincing as an actual locale. Even the loading screens contribute to the illusion, introducing each new day with a specific date and its associated saint as though following a timeline ripped straight from a history textbook. 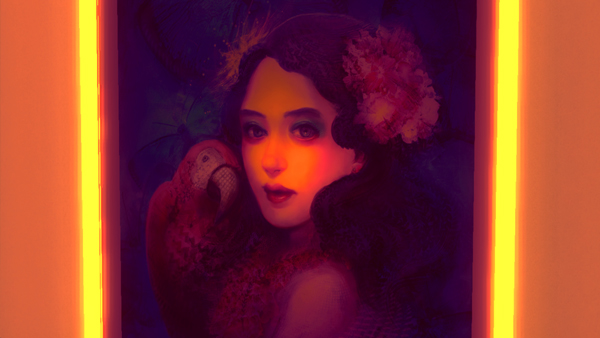 One of countless paintings found hanging on Ortega’s walls. Polly want a penthouse?

Angela herself is just as convincing as a highly principled, strong-willed, intelligent woman with a sympathetic past and uncertain future. Little things like diary entries, family photos, and internal musings on the significance of abstract ideals of art and freedom and even love bring her to life in a believable, touching way. If only the player were allowed to more fully connect with her – if only she were allowed to ever do anything besides clean and decorate – she’d be one heck of a leading lady.

Overall, Sunset feels like the first rough sketch of what could one day become a masterpiece. Full of unrealized potential, it is a beautifully original, captivating idea that seems to have only been half-executed thus far. While the developers have stated their intentions to continue to sand down the rough edges and polish things up, it still feels a long way from finished, and not just because of surface-level glitches or the fact that the cursor-based choice system is faulty beyond reason. Whether such issues can be fixed without starting fresh is uncertain, but Tale of Tales can at least be commended for trying something new – it indicates a boldness and creativity which bodes well for their future endeavors.

Sunset is currently available on Steam for $19.99. While the amount of work that went into the game is obvious, it might be best to wait for a sale unless you happen to be an art fanatic, a hipster, or really, really into 1970’s aesthetics. What you’re actually buying here is several hours’ worth of menial chores, love notes, and voice-over narration spaced across about fifty different sunsets. Playtime varies depending on how dutifully you carry out your tasks and how much attention you pay to the details of the story and your surroundings.

Sunset set out to be a different sort of game, and in that, at least, it succeeds. Where it falls short is lending any real weight to all the wonderful ideas from which it sprang into existence, and the result is what feels like an exciting experiment left disappointingly incomplete.

Unfortunately, in his preview of the game fellow Artistry in Games writer Elijah Beam touched on Sunset‘s ultimate hidden gem long before I even installed it on my own computer. The scene goes something like this: a major explosion and the sound of shattered glass compel the player to run out to the balcony to see what is afoot, only to find the city below in utter chaos. A moment which might have been merely shocking becomes strikingly human when the player catches sight of Angela’s reaction — hands pressed to her mouth in horror and disbelief — reflected in the window. For one brief, shining instant, player and player-character are in perfect emotional sync, and the effect is priceless.

– The majority of Angela’s work is downright boring

Sunset was developed for PC by Tale of Tales and is available for purchase via Steam and through the game’s official website.