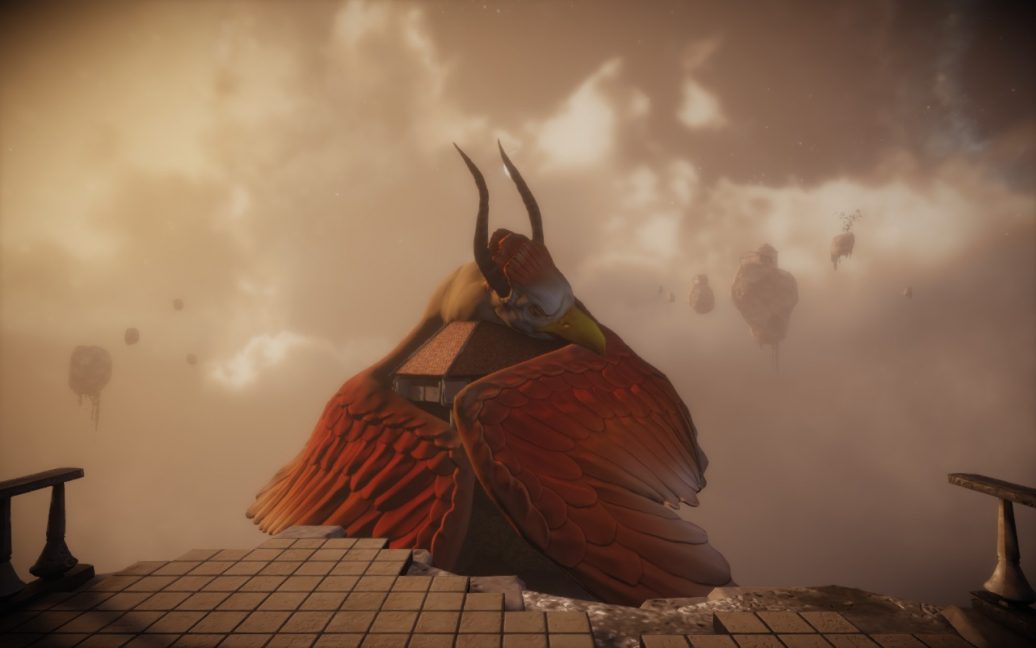 What did I just spend two and a half hours playing? I’m not even sure if I could call it playing, considering all I really did was walk around, press the “E” key a few times, and jumped off a ledge once or twice. If you were not a fan of Dear Esther, it’s best you hit the eject button now because The Old City: Leviathan is very much Dear Esther, but somehow worse despite having meager amounts of extra interactivity.

My opening statement may make it seem like I was biased against The Old City: Leviathan or narrative-driven, linear games in general. On the contrary, I actually enjoyed the original Dear Esther mod and felt similarly about The Stanley Parable and its addition of a branching story. The Old City: Leviathan doesn’t hold up to these examples in any regard other than in its looks and sounds.

Those aspects of The Old City: Leviathan should be praised. While every level feels ripped from other, better games (namely Dragon Age, Metro 2033, Penumbra, Condemned: Criminal Origins, and Myst amongst others), that doesn’t take away from how beautiful the game looks. If you ever wanted to have a semi-trippy nature walk with a basic zoom function camera, then this is the game for you. I took numerous screenshots from the various parts of the game simply for the beauty of it all.

The same can be said for the game’s atmosphere, which evokes a very Limbo-esque tone, but with a sweeping orchestra to back it up instead of electronic tones. I’d love to have this game’s soundtrack, and it may be the most interesting part of the game0. It feels like the soundtrack from a much better game. Why do I say that? Well, the unfortunate truth is that a lot of what might be compelling, besides the music, is buried in text. 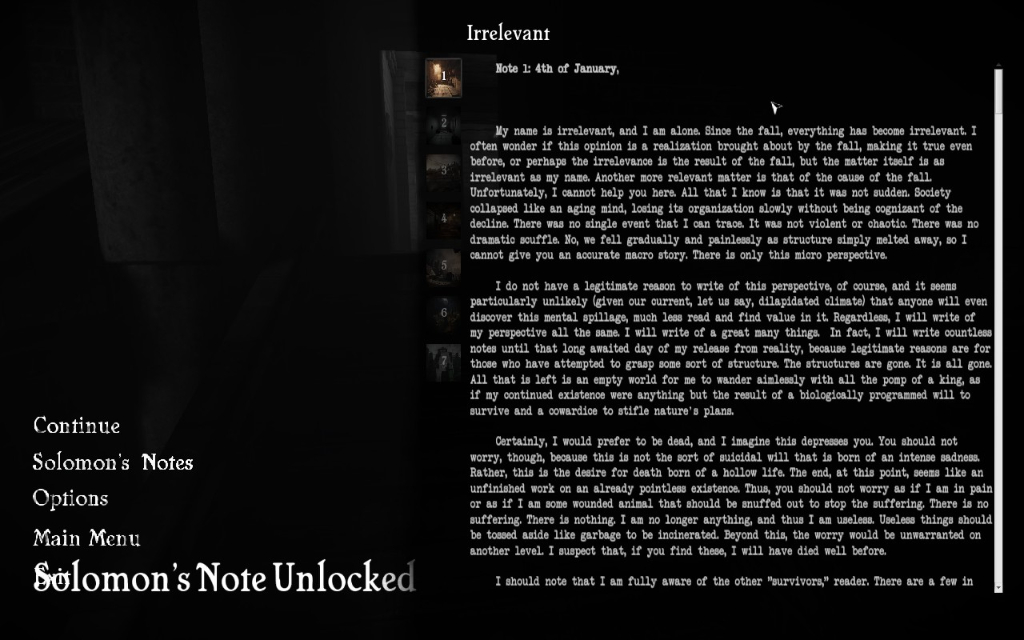 Where we’re going, MUDs will feel like Call of Duty!

I had no idea what The Old City: Leviathan would be like before playing it. I had been told I needed to review it, so I started it and went in blind, which is something most game journalists don’t get the benefit of. Unfortunately, this actually proved to be to the game’s detriment as I kept expecting it to be much more interesting than a long string of poetry and half-nonsensical philosophy spouted about while I walked through some pretty scenery.

At first it feels like the beginnings of a horror game like Penumbra, or maybe a more subdued apocalypse setting like Metro 2033. Instead all you do is walk and sometimes hear a voiceover from the main protagonist. Other times, you find a “Solomon’s note” (see: multiple pages of text that go longer than some forewords in books), and don’t even receiver the voiceover treatment.

It’s not that all the poetic writing is bad, but that it’s just so firmly planted up it’s own rear end that the pretentious and indecisive nature of the writer’s tone and focus feels less like ambiguous discussion and more like pointless exposition. There is no concept of editing, no concept of ego or super ego to the writer’s personal id. Everything is permitted regardless of whether or not it actually amounts to everything. There are interesting ideas with the Council of Modernity, religion, politics, and personal philosophy about right and wrong, but they are drowned out by paragraphs that most editors would shriek at. 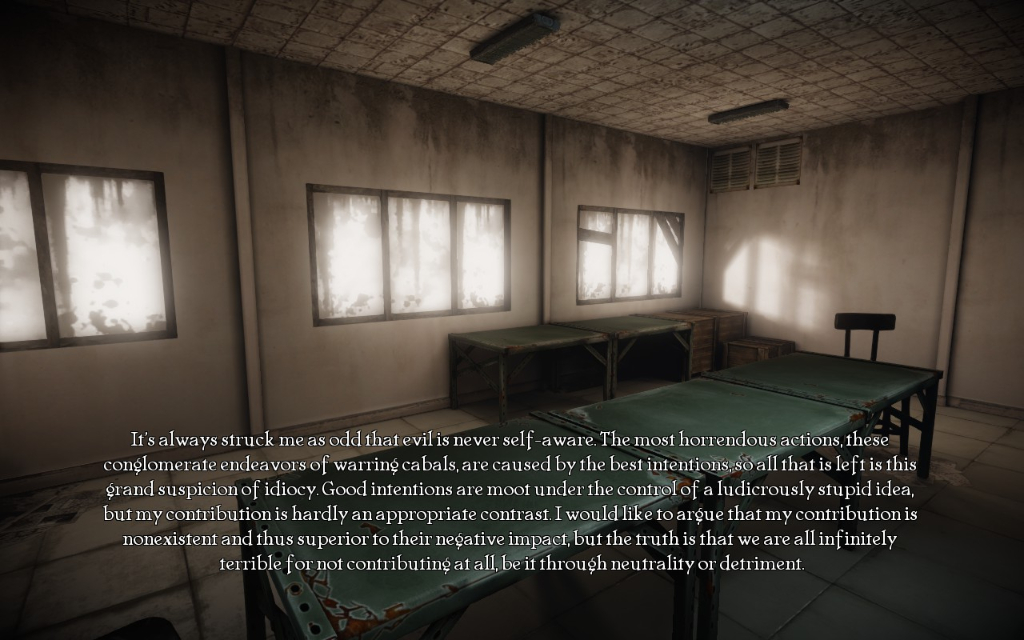 You gotta ask yourself one question, unenlightened swine. “Do I feel deep today?” Well do you, swine?!

It got to the point that I started just muting the game because the voiceover would drag on and on while adding nothing to the experience. What impact your actions in the story have on the discussion is just as unclear as the level progression. Despite being a very short game, it feels like it is always slowly and confusingly progressing. Levels don’t simply flow, but neither do they encourage exploration. It’s comparable to Crysis 2 saying you have multiple approaches to battles when really all you have are several variants on “shoot guys in the head and keep moving forward”. The Old City doesn’t even have the benefit of compelling gameplay to counteract this though, so you’re just left sifting around in a haphazard nature walk.

Why does jumping off a ledge make a bridge? Why do I have to leap between two statues? Why even include jumping and running when running is just moving at a decent walking pace (thus requiring you to constantly hold down the shift key) and jumping isn’t really needed for anything other than one brief “puzzle” (I’m stretching that definition very hard today). Whatever intended experience the developers had in mind for this is either lost in translation, simply ill-executed, or just so vague there is nothing to gain from it.

Other than that, there is nothing else going on in The Old City: Leviathan. It’s a pretty, yet dull and slow game. It wants to say something, but I don’t really think it comes across clearly, if the game even reaches a proper conclusion. The game doesn’t even end properly. It simply goes to black and requires you hit the escape button to bring up the pause menu and quit. I sat there for a good few minutes not even sure if it had concluded or not, because of just how drawn out everything felt. I wasn’t sitting, marveling at some revelation imparted to me. I was just watching the minutes tick by until I could move on. 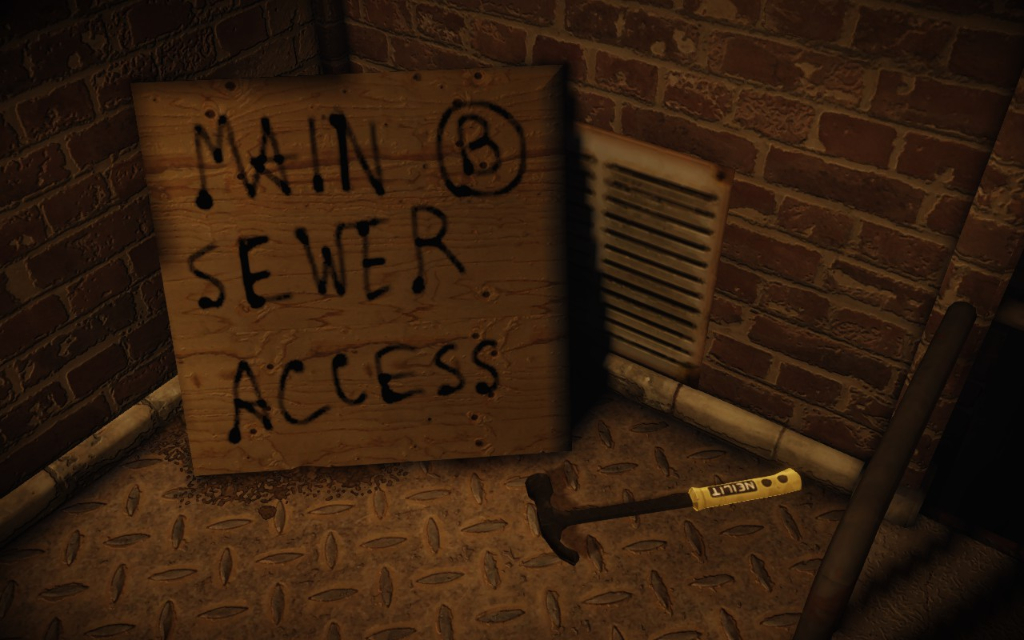 “Pfft! A hammer! What could I possibly need that for in a post-apocalyptic situation! I have exposition!”

I’ve never really tried to ever classify games like this as “Art House” games, mainly because my earlier experiences felt more just like interactive narratives somewhat akin to a Telltale game. This is an Art House game. This isn’t a game meant for mass consumption, and I feel bad so many quality art and sound assets were wasted in this confused attempt at someone’s personal Plato’s Republic. Nothing about it is profound, in fact some of the arguments make utterly no sense.

The Old City: Leviathan is not a game anyone should pick up unless they like taking beautiful screenshots. If you do, congratulations, you just got the new Afrika. If you don’t, I have absolutely no reason for you to pick up this game. It’s as beautiful as it is pretentious, and sadly that’s all I think it will be remembered for. I salute the developer for trying something different, but feel nothing but pity that such high quality art is put to such limited use.

The game is currently retailing for $11.24 with a regular price of 14.99. For seven dollars less, you could just rent a film from Sundance and it’ll still have a longer run time. There’s no branching narrative, and no other unique gameplay attributes, so there’s no reason to replay unless you want to take pictures. I guess if you want a virtual safari through the last survivor of humanity as he’s tripping on surprisingly mellow acid, then you might have something worth looking into. Sadly, there’s not really anything else on offer here. Just pretty visuals and pleasant sounds.

The Old City: Leviathan is not a game anyone should pick up unless they like taking beautiful screenshots. If you do, congratulations, you just got the new Afrika. If you don’t, I have absolutely no reason for you to pick up this game. It’s as beautiful as it is pretentious, and sadly that’s all I think it will be remembered for.

+ It’s got a great soundtrack

– An inconsistent and altogether pointless story

This review was conducted with a copy of the game given by the game’s developer.

The Old City: Leviathan can be purchased on Steam.