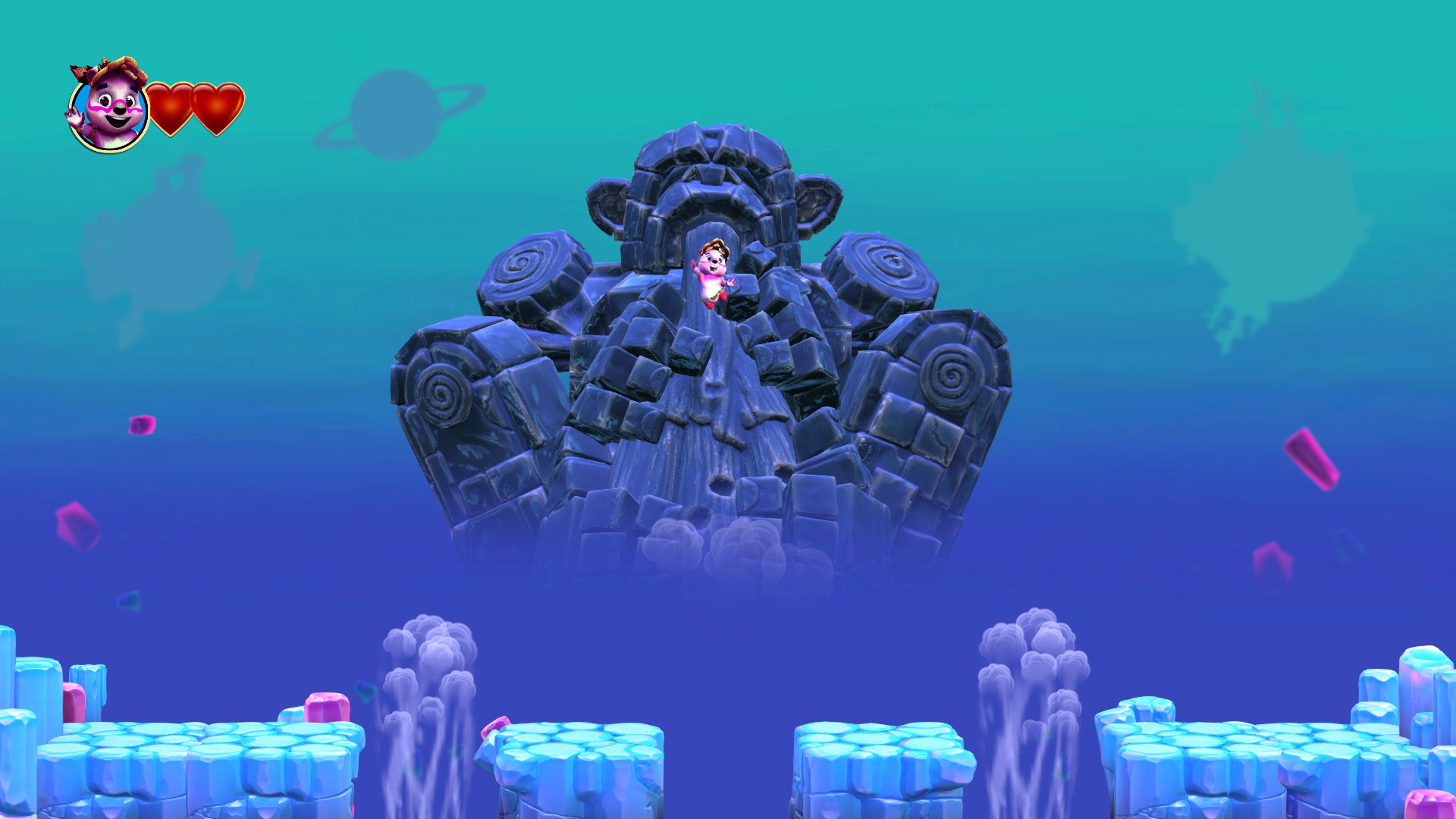 Before I start this review, I need to be clear about something pertaining to JUJU, the game which is the focus of this review. I am not the target audience for this game. If I had to wager, most of you reading are not the target audience either. JUJU is clearly a game aimed at younger audiences. Certainly, while older gamers can enjoy the game, the core audience in mind here is the younger, say 4-10 or so, demographic. With that disclaimer out of the way, let’s get to the review shall we?

JUJU is at its core, a family-friendly platformer made in the vein of the classics with some influences of newer titles such as Rayman: Origins. Narrative-wise, JUJU is as basic as it gets. JUJU and his friend Peyo, through some mischief, unleash the evil Calypso on the world. Calypso kidnaps JUJU’s father, and the dynamic duo go on a platforming adventure, with some collecting of course, to imprison the evil Calypso once again. Like most platformer narratives, the bare bones story is simply an excuse to explore colorful worlds and meet gigantic boss creatures.

JUJU is a mechanically simple game, which makes sense when considering the target audience. The characters can jump, dash through enemies, and unlock four additional abilities, such as a short glide, as progress is made through the adventure. Similar to Rayman: Origins, each level has medals to be unlocked. The medals are unlocked by collecting all the gems you can find or via challenges accessed by finding portals throughout the level. In order to unlock levels, especially the final ones, players must have a certain amount of medals in order to access the stages. There are relatively few enemies found in the levels, with a few exceptions; so players focus more on traversing the levels and collecting gems rather than fighting foes. If all this sounds simple, it is because it is a simple game. This is by no means a detriment though. By keeping the game basic, it is ideal for younger or novice players.

Speaking of younger players, JUJU was designed to allow players of different skills to play cooperatively, without hampering either player’s enjoyment. JUJU’s companion Peyo has two special skills designed specifically for novice players.Peyo has a ranged tongue attack and has a reduced chance to be targeted by bosses. Since the game supports an effortless drop-in, drop-out co-op system, parents or older players can play as JUJU while helping their partner who is Peyo. Another design to accommodate less acclimated players is the two play modes. Before each level, players can start the level either on “Normal” or “Easy” difficulty. The main difference I found was Easy mode starts players off with two additional hearts. Beyond that, I did not notice other major differences in my playtime.

The game is eye-catching. Flying Wild Hog shows off their imaginations with four distinctly themed environments, each with its own design, enemies, and hazards. For example, the gummy bear enemies, icing, and cookie monsters will only be found in the dessert world. This helps keep each world feeling fresh and to stave off repetition. I think my personal favorite was a tropical themed world where most of the world seemed to be created with inflatable pool toys. The art direction showcases crisp and vibrant colors with a distinct color palette for each world. There is a lot here for kids to enjoy and to slip us older players a heavy dose of nostalgia.

The game consists of 40 levels to be completed. Once each world has been completed, a time attack mode for the world will unlock, giving some form of replay value. I imagine this was to entice older players, but some younger ones might enjoy pitting their mettle against the developers as well.

There is a lot to like in JUJU. However, I do have some reservations to temper the praise. As I mentioned earlier, each level has three “hidden” portals to find where players can unlock a medal for each portal they complete. This is a great mechanic to encourage exploration in the levels. The problem lies with what is on the other side of the portals. Each challenge consists of the player trying to collect all of the gems onscreen within a time limit. By the time I had completed the first world, these challenges were already repeating, and new ones never get introduced. When I found I was short on medals necessary to face the final boss and had to once again endure these repetitive challenges, I was slightly agitated.

JUJU is also a bit too simple for its own good. Normally platformers introduce mechanics in each world to keep things fresh. While JUJU occasionally throws something new in, the levels still feel repetitive and when a new idea is introduced, not much is done with it. The abilities players unlock are also sparingly used, and do not change the player’s approach to playing the game. As a result, the abilities, save for the glide, feel tacked on and for the most part, meaningless.

Despite these complaints, there is still enough here to entice small children. For fellow parents, JUJU is possibly another game to play with the kids besides another LEGO game! Rejoice! JUJU is perfect for younger gamers or newcomers to games in general. But who knows? Maybe some older players will find something in this bright and colorful world to entice their jaded hearts as well.

The game is retailing for $19.99 on Steam, but only $14.99 on PSN and XBLA. For once, console owners get a price advantage! My playthrough took four hours to complete the game. Although at least twenty or so minutes of my playing was spent revisiting old levels in an effort to collect medals. There is a time attack mode to be played after completing all of a world’s levels, adding further replayability.

JUJU is a rare case of a game aimed at children which does not patronize its audience, but also has something to enjoy for older players as well. While older players may not get as much out of the game as younger players will, this is a perfect game to introduce a young one to games. It is also a fine addition to games parents can play cooperatively with their children. While not perfect, JUJU does what it sets out to do and does it reasonably well. Flying Wild Hog shows they can do more than create awesome first person shooters.

– A bit too simple

JUJU was developed by Flying Wild Hog and is available on Steam, PSN, and XBLA.

This review was conducted with a copy provided by the developers.