User Generation looks at people who use video games to create something for themselves. The subject for this week in Alex Dean, a leading contributor of custom wrestlers to WWE 2k14.

“CHIKARA is my favourite wrestling company,” Alex tells me. For the uninitiated, CHIKARA is one of many independent wrestling promotions that operate regionally, typically carving out a niche with a particular style of wrestling or presentation that they excel in. For CHIKARA, major influences include Mexican lucha libre and comic-book superheroes.

Like indie games, indie music or independent film, independent wrestling relies heavily on a passionate fanbase.  Alex can certainly count himself among some of the most passionate of Chikara’s cult following, as he has undertaken a project to recreate the CHIKARA roster in the latest major wrestling video game, WWE2K14. “If I don’t make them, there’s very little chance of anyone else making them,” Alex tells me. Using a video game made by a far larger wrestling company, the creations that Alex makes and puts online for anyone to download are spreading awareness of CHIKARA in a rather unique way.

“I’ve been making CAWs since WWF Smackdown! 2 on the Playstation,” says Alex Dean “They were more just wacky ideas coming from an 8 year old’s head, but it was the start. I’ve made CAWs in every game in the series since.” Smackdown! 2 came out in 2000, putting his experience in wrestler creation at around 14 years, albeit spread over nearly as many different titles in the series. 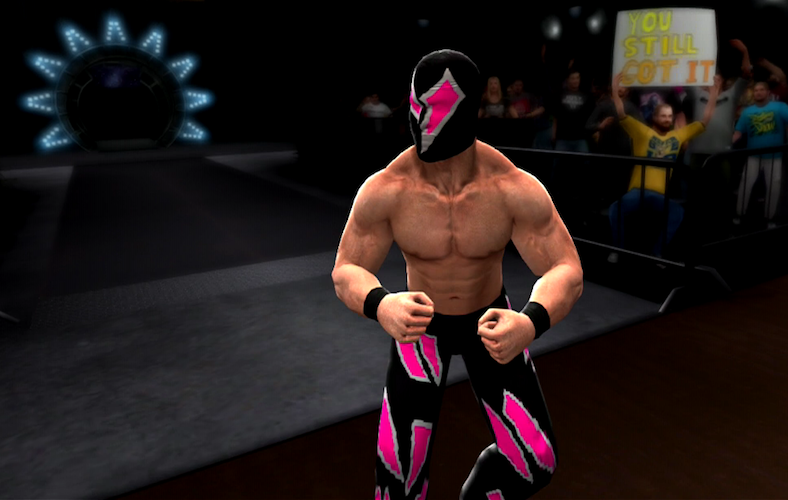 If pro wrestling video games have passed you by, you might not be aware of how big of a deal create-a-wrestler creations—colloquially known as CAWs—are. The various machinations of the business side of pro wrestling means that it is impossible for every prominent wrestler to appear in any one game; it’s up to the fans to fill in the gaps with superstars from the past, up-and-comers not yet immortalised in polygons and talent from rival companies. There have been various online communities over the years that have formed with the sole purpose of being a place to share both the CAWs themselves and the latest techniques for making them.

As the series of WWE games has gone on, the methods of creating new wrestlers has grown more and more complex. “Given the tools, it’s possible to make almost perfect creations – with a little imagination,” Alex says of the create-a-wrestler mode in WWE 2K14. No doubt one of the biggest boons to the CAW scene came with Smackdown vs. Raw 2010, where players were allowed to share their creations in-game for the first time. Prior to this, creators would have to distribute the formula for a character online, which players would then have to input manually—a process that would typically be very time-consuming.

One of the most popular wrestlers on the CHIKARA roster is Jigsaw, and he’s been faithfully translated into WWE2K14 by Alex. A time-lapse video of this particular CAW can be seen on Alex’s YouTube page and it really highlights just how much skill and care goes into creating one of these custom characters.

Many of the wrestlers on the CHIKARA roster wrestle under a mask, which has both its positives and its drawbacks when creating a CAW. Faces are a tough thing to capture exactly, even given the wide range of options available in modern create-a-wrestler modes, so starting with the base of a mask and drawing 2D decals to mimic its design can allow designers to produce something incredibly close to the real thing. Alex has a few tricks up his sleeve to make sure his masks and other fabric decals look perfect. One such trick is drawing designs out on squared graph paper and then using an in-game chequered decal to be able to gauge how his designs will translate onto the character. 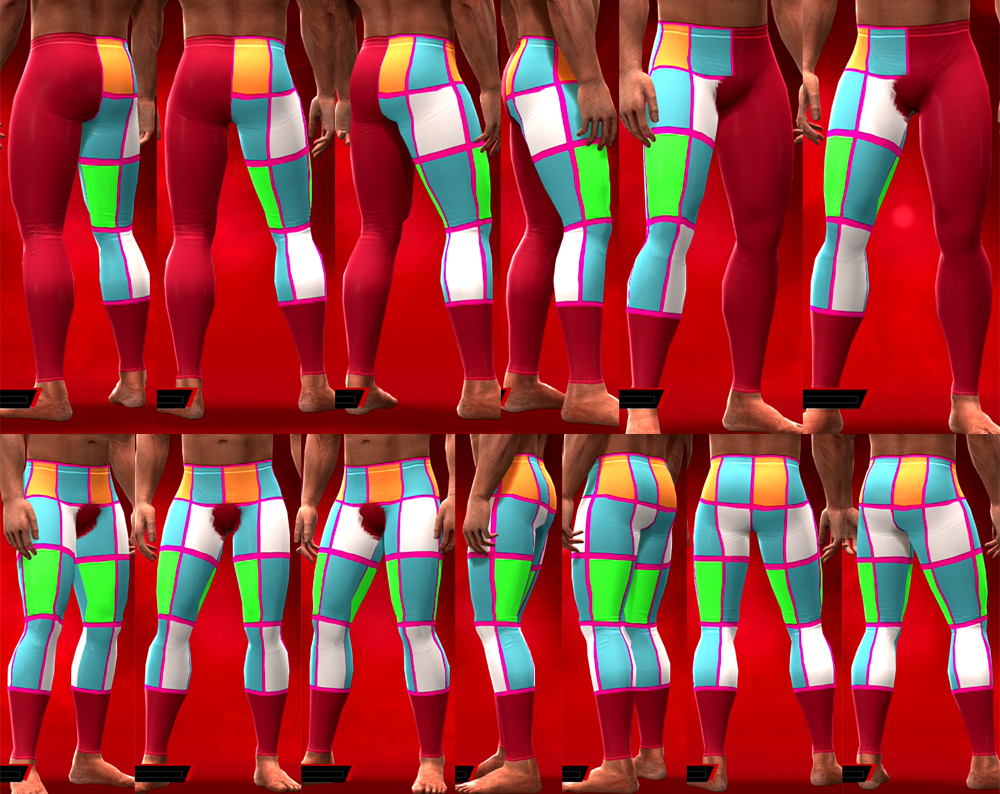 Looking at the timelapse of Alex making Jigsaw demonstrates what it takes to get things just right. Since the game is console-only, it’s important to remember that Alex is drawing his designs with a controller—certainly not an ideal input method, not that you’d know from the quality of his finished work.

Once the CAW is finished, they go up on the Community Creations service for any WWE2K14 players to download and use in their own game by searching for the tag ‘jufu’. Alex also regularly posts videos to his YouTube channel showing off attires and finishing moves of each new character he makes. Below is a comparison of the finished Jigsaw performing his finishing manoeuvre, the wonderfully named “Jig ‘n’ Tonic” compared with the real life version.

Wrestling games as a whole often have as much appeal as a simulator as a game to be played actively. The hugely popular Video Game Championship Wrestling channel on Twitch.tv has grown into its own chaotic promotion that regularly draws in scores of viewers to watch computer-controlled characters fight it out. For many, the gameplay of wrestling games simply doesn’t hold up—but the appeal of having a wrestling sandbox does—and Alex perhaps is amongst this number.

“It’s funny how little I actually play matches,” he tells me. “The majority of my time is spent creating, so I usually just play a few matches after creating someone and then move on to another creation. I’d say for every hour I spend creating, I spend about five minutes actually wrestling. I think the games have gotten a little stale. Maybe it’s just because there’s been little development over the past few games.” The official WWE video games are pretty much the only option for wrestling fans looking for a video game, so it’s of no real surprise that people like Alex continue to buy the games and produce content for them. The glory days of No Mercy 64 (or Smackdown! 2 if you were a Playstation owner) may be long gone, but something of the same charm remains for long-time fans of the series (and I’m not talking about the now-geriatric engine that recent offerings still run on). 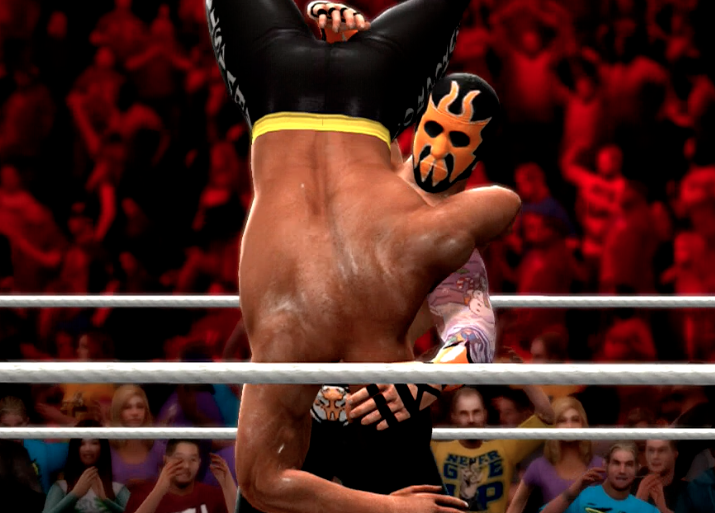 Outside of his YouTube channel being partnered with a network, Alex has no great urge to transfer from CAW design to game development. As far as game design goes, I don’t think I have the knowledge or skill set to go into that. I see my CAWs as more of a recreational pursuit. It’s quite therapeutic, and it’s something that seems to give quite a lot of joy to other people as well, which is nice.” With a huge number of subscribers on YouTube and many more having downloaded his work in WWE2K14, it’s no doubt that his work is being enjoyed the world over—but what do those at CHIKARA think of it?

I asked founder of CHIKARA and world-renowned independent wrestler Mike Quackenbush about Alex’s work, and he had this to say: “We believe in pro-wrestling’s power as an art form. To reach people, to move them, to touch their lives. And we have fans—truly awesome fans—that take our cause to heart. They make it their own. And they find ways to spread the CHIKARA gospel using whatever talents and voice they may have. Alex is a wonderful example of this, and his talent and dedication are plain to see.”

Making your own content in games should be satisfying in its own right—and from speaking to Alex it’s clear that he does what he does because he enjoys doing it. That being said, when you can share your creations worldwide via the internet, the sky really is the limit of how many people can enjoy your content—and who those people might be.

One thought on “USERGENERATION: Alex Dean”