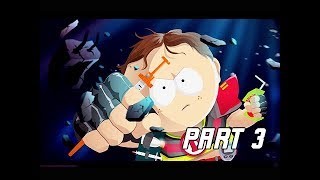 Buy the game here and support the channel by using my Amazon Affiliate link:

Story:
he Fractured but Whole takes place after the events of South Park: The Stick of Truth, with the 21st season episode Franchise Prequel as a tie-n. The children begin a new adventure, again set in the town of South Park in the Colorado Rocky Mountains, this time becoming role-playing superheroes. However, a falling-out over Cartman’s planned film franchise splinters the boys into two groups. Those who side with Cartman join C*** and Friends, while rival group Freedom Pals, led by Mysterion, call for their own franchise, starting a civil war between the two groups. The player again controls The New Kid, though now has the option of choosing the gender of The New Kid. The plot revolves around C*** and Friends looking for a lost cat to gain the cash reward to further their franchise, and in the process stumble upon a plot to unite all the crime families in South Park. In order to continue their franchise, they decide to look in on the matter.

Gameplay:
South Park: The Fractured but Whole will feature twelve superhero classes: Brutalist, Blaster, Speedster, Elementalist, Gadgeteer, Mystic, Cyborg, Psychic, Assassin, Commander, Netherborn, and Karate Kid. Unlike The Stick of Truth, the game allows the player to choose their gender of their character which will affect how other characters react to the player. The Fractured but Whole also features race customization, which is jokingly labeled as a difficulty level slider. The slider doesn’t affect combat difficulty, rather how the player talks to other characters and the amount of money the player receives.

Buy the game here and support the channel by using my Amazon Affiliate link: