Neverending Nightmares Review: Be Afraid of the Dark 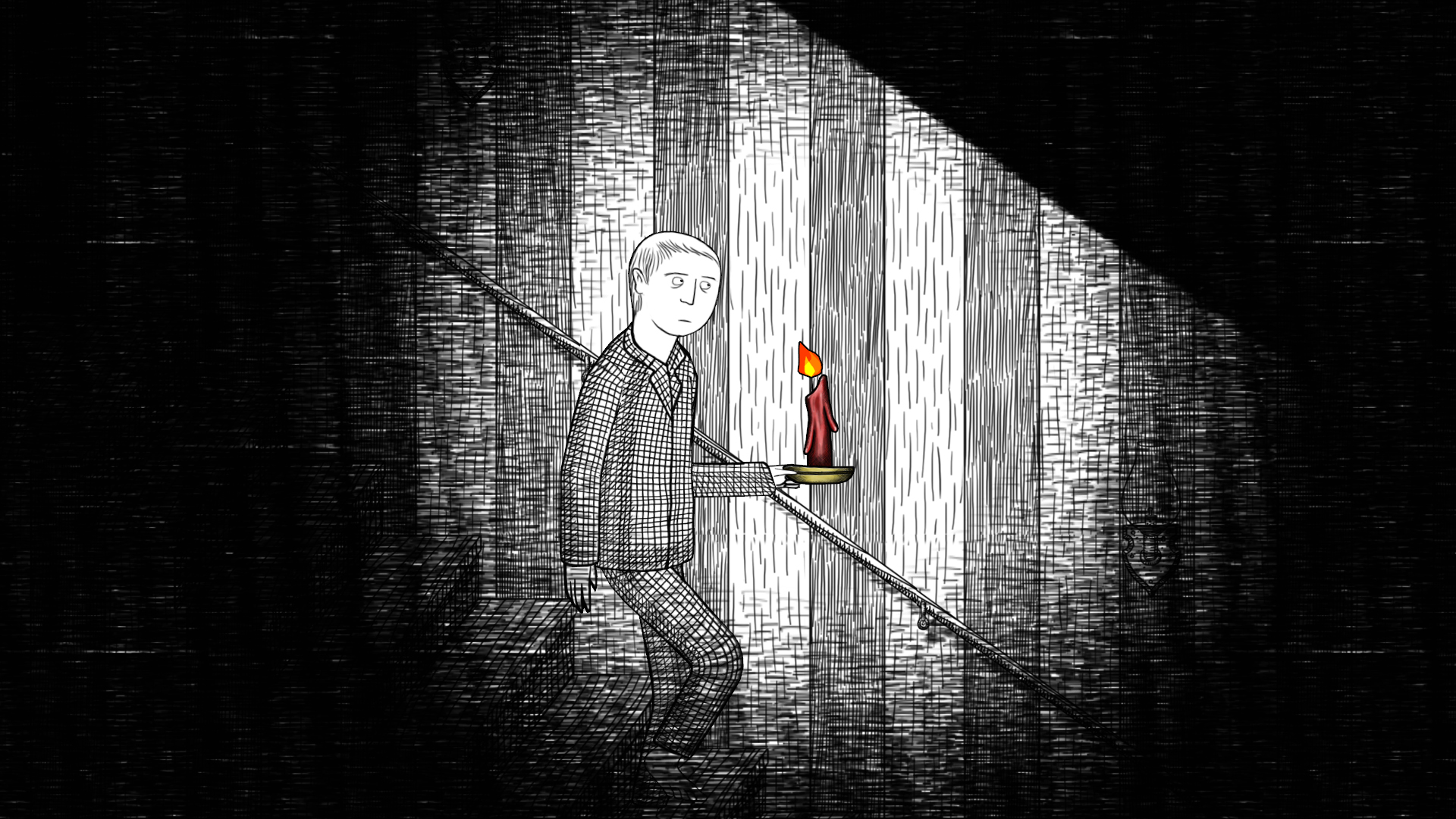 All too often, the classic “inspirations” for horror games get too obvious and turn into crutches which highlight, rather than distract from, a story ultimately lacking in originality and substance. Not so with Neverending Nightmares, an illusory tale of trauma and terror influenced by developer Matt Gilgenbach’s real-life struggles with depression and OCD. Though much of the imagery will be familiar to fans of the genre – or just about anyone who’s ever had a bad dream – the overall experience is no mere retelling of an old campfire story, but a descent into a h*** so personal it feels almost too intrusive to play. Almost.

In a warped world of vicious visions and shifting realities, the one constant (to an extent, anyway) is Thomas, the player character. Barefooted, bleary-eyed, and asthmatic, Thomas escapes from one nightmare after another, waking only to find he hasn’t really woken up at all – perhaps he never will. Each dream seems worse than the last. Unfortunately, the only way out seems to be through. Luckily, navigation is simple – controlled by the usual directional buttons, with customizable mapping – and interactive objects are highlighted with splashes of color in an otherwise monochrome world.

The game refrains from saddling the player with specific goals or instructions, and the only given motive for progress is the assumption that Thomas does, in fact, want to break the vicious cycle of his dreams and wake up, and that the only way to do this is to keep moving forward. Creative level design and ambiguous narrative clues ensure that the desire to continue to progress never flags. Curiosity becomes determination bordering on obsession as the player pushes forward in the desperate hope of waking and uncovering some sort of truth or logic, despite the fact that the game never promises such closure. As one sign in an office reads, “Everything is a lie.” Even if Thomas should wake up, will he be able, after so many false starts, to trust in the reality of the waking world? Would you?

Among (many) other things, Thomas seems to be haunted in particular by – memories? Hallucinations? Apparitions? – of Gabrielle, a dark-haired sometimes-woman, sometimes-child who may or may not be Thomas’s sister, wife, daughter, or doctor. Or perhaps she’s none of the above. Who knows? Thomas certainly doesn’t seem to, and the woman herself changes her mind on the matter with dizzying frequency.

Gabby is not the only unstable element in this twisted dream-world. Each environment pulls trick after sadistic trick on the player’s memory and Thomas’s questionable sanity. Rooms and corridors rearrange themselves behind his back, portraits on the walls relocate at random, and different deaths may lead to drastically different dreams. Fortune does not favor the brave, either – the farther you go, the more surreal and disturbing things become.

Then, of course, there are the monsters. Screenshots don’t do them justice. In terms of pure visual design, they are neither the most interesting nor the most original enemies to be found in a horror game. Silent Hill fans might be tempted to compare a certain baby-faced creature to the Twin Victim in Silent Hill 4: The Room, and there’s a definite similarity between the patients in Neverending Nightmares’s asylum level and the suitors in the Justine expansion of Amnesia: The Dark Descent. In action, however, they do their jobs – namely, scaring the living daylights out of the player – pretty well, creeping up on the player unexpectedly and executing brutal kills without mercy.

The one exception to this lies with the aforementioned patient monsters, which inspire fear at first sight but become rather tiresome with repetition. It’s an odd misstep in a story with an otherwise expertly paced buildup of terror – even the odd jump scares are all perfectly timed for maximum heart-stopping effect – but the asylum section takes just a bit too long and features too many enemies. By the end of the level, I became irritated instead of intimidated and found myself treating the patients like Donny in The Big Lebowski, verbally threatening them with bodily harm if they didn’t shut up and get the h*** out of my way.

“Too long” is a relative term, however; the entirety of the game actually takes only a couple of hours at most to play through once, keeping things short and sweet. The replay value, by the way, quadruples the true length of the game, thanks to a branching narrative which features multiple and highly varied paths and three quite distinct possible endings. The fact that it’s not always clear what actions will lead to which branch or ending complicates matters further, and each revisited level begs for closer examination and analysis, especially once the player begins to form his or her theories regarding Thomas, Gabrielle, and their actual relationship to one another.

One drawback with backtracking and replaying are the dead ends, which were mildly disorienting the first time around, but upon subsequent encounters lose their charm and reveal themselves for what they truly are: unnecessary. Not all dead ends are equal; some rooms offer legitimate scares, enemies, or clues in place of opportunities to progress, which is fine. The problem is that some rooms are utterly empty, offering little or nothing at all in terms of narrative, atmosphere, or interactivity. In these cases, I would much rather walk face-first into a few locked doors than stumble pointlessly into a nice, normal version of the bedroom for the fifth time.

Another flaw resides in one of the endings. Two out of three are excellent – depressing, even horrifying, perhaps, but in a darkly satisfactory way – but the “Wandering Dreamer” finale happens so fast that blinking might cause you to miss it. It didn’t feel like an ending at all, and when the credits rolled I felt very much like a sleepwalker doused with a bucket of cold water. While that does work with the theme in a way, it also means the player gets almost no time to process the conclusion to which their choices have led them. It’s the one moment in the game that makes you wish there was a rewind button.

The good news is even these relatively minor hindrances take nothing away from the atmosphere, which is one of the most dense and physically draining I’ve come across in a video game. The most vital instrument used to create the soul-sucking aura of Neverending Nightmares is Skyler McGlothlin’s unnerving score, which can only be described as a soundtrack of broken things. Off-key notes and distorted music box melodies blend with sound effects plucked straight out of a haunted house, including ghostly whispers, weeping, and heavy, lumbering footsteps. Especially poignant are poor Thomas’s gasps for air whenever he attempts to sprint for too long; it’s a sound so sincere it feels like an actual asthma attack. At times I felt short of breath just listening to him.

Though the game hints subtly at survival horror influences, Neverending Nightmares itself doesn’t quite fall under that category. Yes, there is some monster evasion (and zero combat) going on, but many of the other standard components are missing. Accidental death is not especially punishing, setting the player back only as far as the end of a hall on most occasions, and the usual puzzle element is nonexistent. Instead, the game is a psychological horror, a private journey through the mind of a man haunted by frightening visions and violent despair. It’s not an easy journey to undertake, and many a road to h*** is paved with good intentions, but the only thing more difficult than playing it once is resisting the urge to play it again.

Though unchallenging in the usual sense of the word, Neverending Nightmares offers a horror experience unlike any other, utilizing universal nightmare imagery – teeth, dolls, darkness, etc. – to draw players into the protagonist’s unique and very personal h***. Featuring Edward Gorey-like art, dynamic and disturbing level design, a warped and branching story with three possible endings, and an original score most assuredly recorded in the underworld, it’s not a “fun” game to play, but it’s certainly a memorable one.

The first time a seemingly innocuous object makes a move. This varies depending on which path the player is on, but the jarring effect is the same. It’s at this moment that it finally dawns on the player that nothing in the game is safe or to be trusted. Not a single d*** thing.

– Visual design on the enemies could be much more inventive

– Some rooms feel unnecessary and distract from real exploration

– One ending is too abrupt

Neverending Nightmares was created by indie developer Matt Gilgenbach and is available for purchase via Steam or Ouya.

A Steam copy of the game was provided by the developer for review.