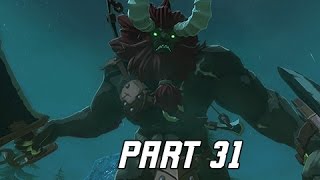 Story
In the past, the many races of Hyrule lived together in harmony, the Sheikah’s blue aura providing life to the land, and everyone benefited from the Sheikah’s advanced technology. That all ended when a beast that came to be known as Calamity Ganon appeared. The Hero and the Princess attempted to stop the evil, but the Hero ultimately failed. As they helped the Princess see to the Hero’s injuries, the Sheikah, as a last resort, awakened an army consisting of four divine beasts and a massive amount of mechanical guardians, that they had created in secret. They managed to seal Calamity Ganon inside Hyrule Castle, but during the battle, the monster’s power turned their army against Hyrule, and out of fear, the King of Hyrule and his people banished the Sheikah from the land.

In the present, an amnesiac Link awakens from a deep sleep, as a mysterious female voice guides him to the now ruined kingdom of Hyrule. He meets an old man and learns that Calamity Ganon has been sealed in Hyrule Castle for one hundred years. Although trapped, Calamity Ganon has continued to grow in power, and Link must defeat it before it breaks free and destroys the world.

Gameplay
The Legend of Zelda: Breath of the Wild departs from most games in the The Legend of Zelda series, as it features an open-world environment twelve times larger than the overworld in Twilight Princess, with less emphasis on defined entrances and exits to areas. Similar to the original The Legend of Zelda, the player is placed into the game’s world with very little instruction, and is allowed to explore freely at their own pace.

Players control Link, who can jump and climb almost any surface, and can find various items in the world, including weapons, shields, clothing, and food that can be eaten or cooked to restore health. Weapons break after excessive use, but many have multiple uses; for example, tree branches can be used to light fires, and shields can be used as makeshift snowboards. Throughout the game, Link possesses a piece of technology known as the Sheikah Slate, which provides players with a map and allows Link to create waypoints and investigate enemy stats. By discovering various runes, the Slate can be upgraded with various powers, including creating bombs, controlling magnetic objects, and stopping time around objects and enemies. Players keep track of both main and side quests given to them through the use of a quest log, which is called an Adventure Log within the game. If the player fulfills certain conditions, they will unlock an alternative ending of the game.