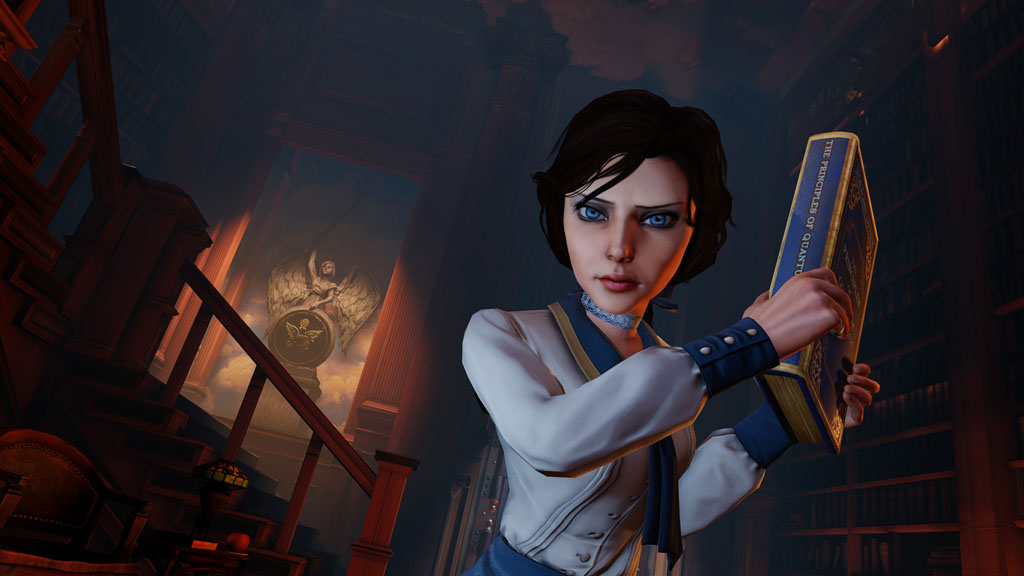 The video game industry doesn’t really understand women that well. There are a lot fewer women making games than there are men, and a lot fewer women being represented by games than men. One of the much-discussed results of this is that an awful lot of female characters in games are depicted in ways that are sexist at best, and downright misogynistic at worst. From the breast physics of the Dead or Alive franchise to the endless sea of damsels in distress out there, there’s no shortage of dodgy representations of women in games. Plenty of commentators have picked these problems apart, analyzed characters and tropes and criticized creators – perhaps most notably Anita Sarkeesian’s excellent, and unfairly controversial, Tropes vs. Women in Video Games YouTube series.

What’s been done less is to look at the games that have gotten it right, to consider female characters that aren’t mere s** objects, that have personalities, strengths, aims and motivations outside of their relationships with men, and who don’t exist purely to further male characters’ story arcs. It’s all well and good to talk about everything the video game industry is getting wrong when it comes to representations of women, but there’s real benefit to looking at what it’s gotten right – if for no other purpose than to give developers something to aim for in their own work.

First, a couple of quick caveats. I don’t want to suggest that no-one’s done this before – of course they have. Even Anita Sarkeesian makes a point of discussing good representations among the bad – but the focus of her series, and most other writing on the topic, is on the troublesome representations of women, and I think there’s value to a series with a more positive focus. Secondly, I don’t want to be perceived to dismiss or play down the problems that Sarkeesian and others are discussing. They’re real, they’re unpleasant, and something needs to be done about them. I just hope that looking at a few good – though not necessarily perfect – examples will help signpost the way to better women in games.

This is the first in a planned ongoing series looking at female characters in games that aren’t over-sexualized, that aren’t solely reliant on men, that have their own goals and ambitions, that act rather than just react, and more. I’ll be looking at a new character in each piece, and will consider their design, voice acting, writing, plot role, and relations to men. None of them are likely to be perfect, and I’ll discuss the flaws in their characterizations, but each is broadly successful, and worthy of emulation and praise.

So, with that out of the way, let’s look at one of the women that gaming got right. 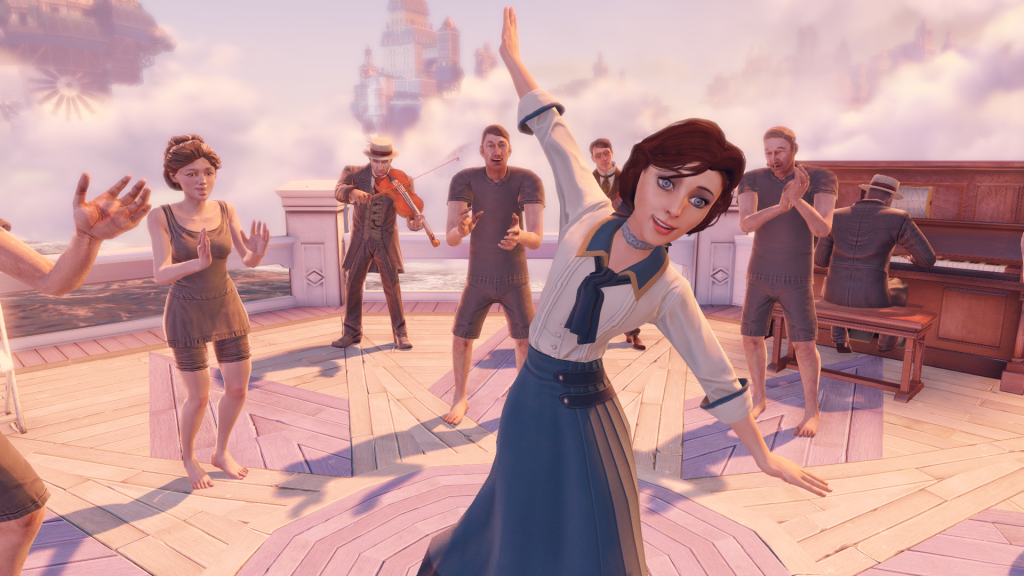 In advance of Bioshock Infinite’s release, designer Ken Levine made much of the development of Elizabeth. The process was apparently fraught, with several developers pushing for her to be removed from the game, but Levine was insistent. Bioshock Infinite couldn’t be the game it needed to be without her presence, he argued. She was to be the most fully realized AI character in a game yet, a personality-filled individual in her own right, wandering around the game world and exploring independently of the player.

That work paid off, and for anyone who’s played the game, I’m sure it’s hard to imagine the game without her. Not only is she tightly woven into the plot, but Elizabeth is a vibrant and interesting part of the minute-to-minute gameplay. She feels real, and she feels alive, which helps her to become one of the best characters in gaming’s history.

Setting aside the Burial at Sea DLC, Elizabeth has two main outfits across the game. When you first meet Elizabeth, she’s dressed in a long skirt and a blouse. It’s period appropriate, not especially revealing or sexualized, and fits the character’s innocent nature. It’s exactly the sort of outfit that more female characters should wear – one that simply fits them as a character, without any considerations for s** appeal.

Elizabeth’s second outfit lets the game down a little – though it could be a lot worse. Mid-game she switches into a long dress, bringing a little more glamor to her. The only problem? The corset that her b****** spend the rest of the game apparently trying to fight their way out of. It’s far from the most gratuitously sexualized a character has been in gaming, but it’s a disappointing note in the game, not helped by the occasional male gaze cutscene dragging the camera into her ample bosom.

Outfit aside, Elizabeth is conventionally attractive: thin, curvy and pretty. She’s not exactly promoting diverse body images, but her proportions are at least broadly realistic. In all, she was clearly designed to be attractive, but it would be a push to describe her aesthetic as over-sexualized. 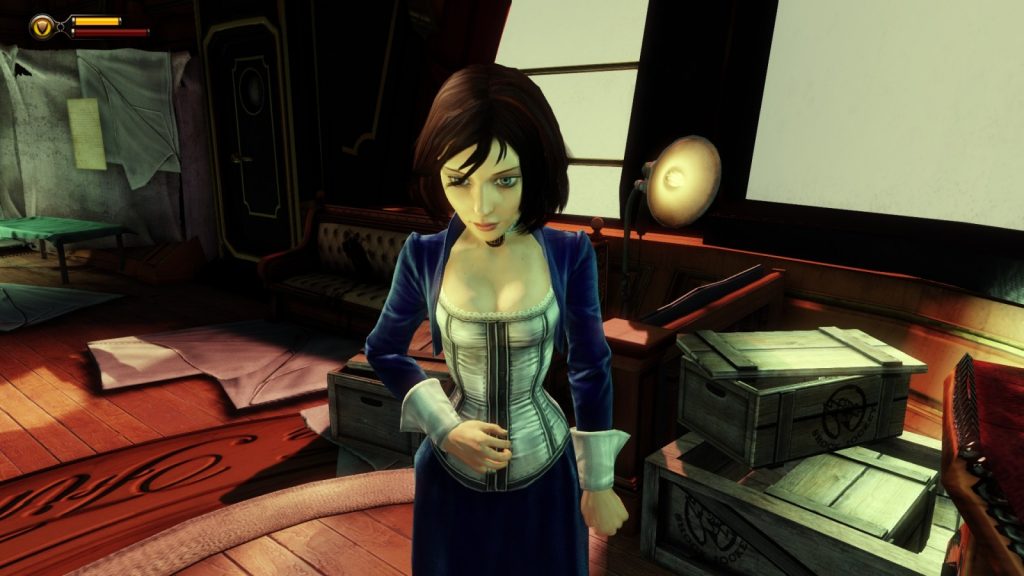 Elizabeth undergoes somewhat of a transformation across the course of the game – without giving too much away, she develops from a rather naive and playful child to a strong and forceful presence in her own right. She makes her own decisions across the game, rather than simply following protagonist Booker DeWitt’s lead constantly, and has a clear set of interests and motivations. She has a personality, rather than simply being a blank slate.

That character is also an interesting and novel one. Elizabeth is no stereotypical femme fatale (despite nods to this in Burial at Sea) or demure damsel in distress. Her backstory, having been raised in solitude under constant observation, leads to a curious and fascinating personality, and one that the player inevitably wants to spend time with. She really feels like a person, not just a s** object, plot device or trite romantic interest.

Unfortunately, for all of her strengths, Elizabeth is not Bioshock Infinite’s protagonist, and you don’t get to play as her at all across the main game. Instead, she plays a support role during gameplay, throwing ammunition and money to Booker and using her powers to bring forth important items that add to the strategic gunplay. She’s competent, but firmly in a support role.

Thankfully, that gets turned around for the second part of Burial at Sea, when the player takes control of Elizabeth herself. There’s a little bit of “feminizing” the gameplay here (she’s a girl, so she’s weak, so she has to be stealthy!) but for the most part the gameplay changes seem to be in keeping with Elizabeth’s character – it would be rather hard to imagine Elizabeth as we know her going in guns blazing.

Elizabeth is reassuringly central to the plot of Bioshock Infinite. Again, without giving too much away, much of the game revolves around her, and she’s no bystander. It would be fascinating to see what the game could ever have been without her in it, as it’s almost unimaginable.

Perhaps more importantly, not only is Elizabeth central to the plot, but as it continues she begins to drive it. She starts off as a largely reactionary figure – even a bit of a damsel in distress – but by the end of the game she makes crucial, world-altering decisions, takes decisive actions and pushes the plot towards its ambitious conclusion. There was always a risk with this game that Elizabeth would wind up little more than a MacGuffin, a plot device for other characters to fight over, but Levine resists the temptation to deprive her of all agency, and the game is all the better for it.

One element that many writers stumble over with female characters is their relationships to men. Male characters are typically allowed to exist independently, but women have a tendency to end up as daughters, sisters, wives and so on, and are often defined almost exclusively by these relationships. Elizabeth isn’t totally free of this – she is the daughter of the villain, Comstock, which is of key significance – but there’s one key relationship that Levine got right: her and Booker.

Theirs is not a romantic relationship, as is so often the case with female supporting characters and male protagonists, and in fact there is little discussion of romance at all with regards to Elizabeth. This is a big part of what saves her from objectification, as her relationship with Booker – and by extension the player – is divorced of sexuality, allowing character and personality to come to the forefront. This is despite the fact that they designed Elizabeth to be pretty – avoiding the trope of making female characters that aren’t romantic interests less attractive or less feminine.

Elizabeth is as much a technical achievement as a creative one, as the developers finally managed to create a sidekick that didn’t simply get in the player’s way throughout the game. But it’s that technical achievement that allows the creative work to shine through, revealing Elizabeth to be a well-rounded and fully-formed character that the player can’t help but engage with. She’s pretty, but not there to be T&A; she avoids the pitfalls of female stereotypes; she drives the plot and has a serious sense of agency; and she is treated as character, not a s** object or generic, replaceable romantic interest. Elizabeth isn’t perfect – I’d love to see that corset dress redesigned – but she’s the proof that, above all, what matters when creating female characters is just to create great characters, period.