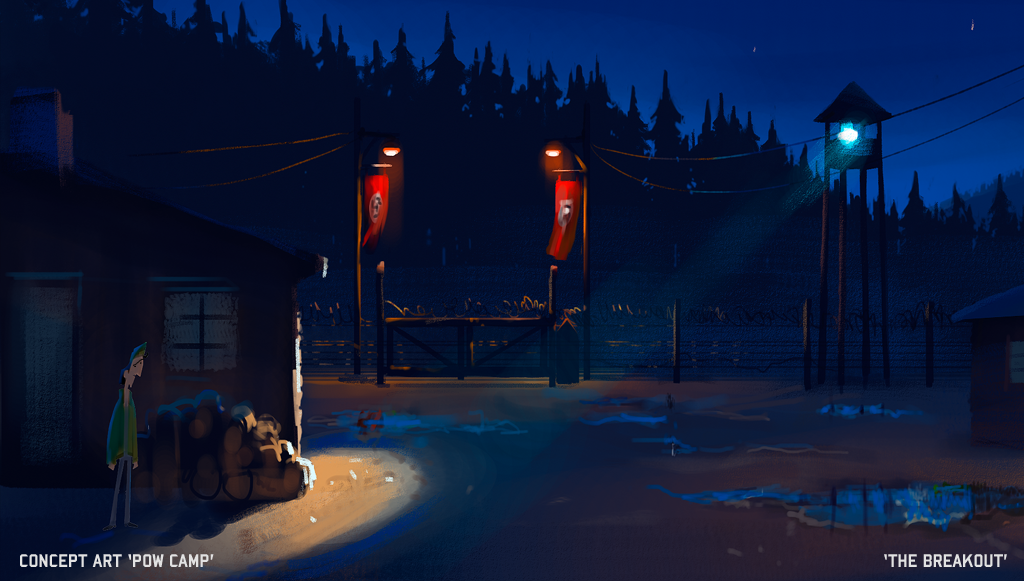 Ron Perlman’s famous opening lines in the Fallout games have  become somewhat of a meme amongst the gaming community. However, the funny thing is that when applied to gaming itself, it’s still very accurate. The war video game genre is often brought under scrutiny for constantly recycling through the same tropes and concepts. Call of Duty and Battlefield drop yearly releases that barely shake up the formula of what made their multiple predecessors popular. Game franchises like Medal of Honor and Spec Ops have hit staggering numbers of sequels over the last few generations. And even the strategic war games still play on familiar concepts. The one connecting thread is that almost every one of these games puts you in the shoes (or tanks.) of soldiers. The main focus is on action. And generally speaking, the games rely on gritty realism as well.

But if we’re going for realism here, what of the rest of the world? What of all the parts of war that aren’t about the actual fighting itself? With video games continuing to push how we interact with stories and concepts, surely we can find a new way to approach war video games as well? Of course we can, and the following three games seek to do exactly that. Be it through different genres or different player characters, these games are standing on the front lines in the battle to expand upon the war video game genre.

Valiant Hearts: The Great War – All Sides Of The Story

Ever since the UbiArt Framework system was first introduced during the lead-up to Rayman Origins, I dreamed of Ubisoft allowing the engine to bring different genres and artstyles to life. The endless possibilities in a system that allows for hand-drawn works to be animated and turned into games was just too good to be true. Finally, after a long wait, Ubisoft finally opened UbiArt up to it’s teams. Two games are coming out that utilize the system, the first is the fantasy “J”RPG Child of Light, and the second is puzzle-adventure game Valiant Hearts: The Great War.

Valiant Hearts plays out from the perspective of five separate player characters, each coming from a different country and perspective in World War 1. The game’s plot circulates around something unexpected in a war game: love. Four different characters will come together to help a fifth character, a German soldier, find love. The concept was established based on real letters from the World War I era.

Filling out the cast is a French farmer who finds himself a prisoner of war, an American soldier fighting in honor of his dead wife, a British pilot who may or may not actually know how to fly, and a field medic who must handle the brutality of war’s result. Oh, there is also a dog. Like Call of Duty: Ghosts. Except not. What’s most impressive about this is that, for once, we’re put in the position of other sides of war. So many of these games put us in the traditional American soldier. It’s refreshing to see a game remind us that there are other countries that are equally effected by war. 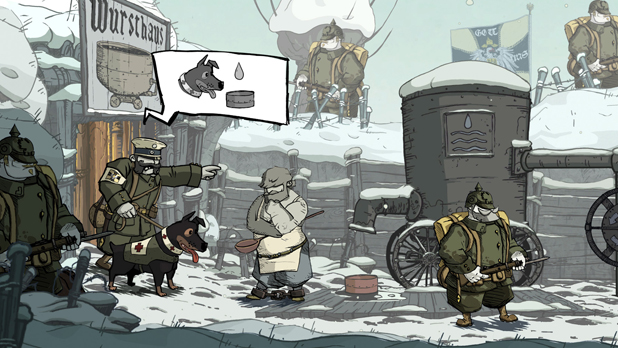 The game’s focus is on interaction with your environment. Instead of putting a gun in your hand and pointing at things to shoot, it instead puts various tools in your hand with the purpose of advancing the story at your own pace. It seems to encourage playing around and indulging in the game’s beautiful hand-drawn environments and interacting with the stylish character models.

Presenting characters with different perspectives and motives promises to offer a more involving, personal story than most games of this genre. And focusing on a completely different motivating factor like love has a ton of potential for interesting character drama set in the framework of a battlefield, seemingly placing the actual war as simply a backdrop in a totally different narrative experience.

Little is currently known about the upcoming This War Of Mine from Anomaly developers 11 Bit Studios, but it’s already made quite a splash with it’s surprising and effective teaser trailer, which starts out like a typical war video game trailer, and takes a sudden shift in focus.

The game’s focus isn’t on soldiers, but instead puts you in control of a group of civilians caught in the middle of a war-torn city during a siege. Hounded by enemy snipers and forced to struggle to survive, the game is going to focus on the oppressive nature of war on those that aren’t doing the actual fighting. Applying the pressures of war to a group of average citizens has potential to lead to a lot of strong character drama, and focusing the game on making difficult decisions for the sake of survival could easily push the war video game genre to new heights of emotional impact. Think “The Walking Dead” but in a far more real environment.

The Breakout – A Different Kind Of Battle

Rounding out this collection of very differently-focused war games is The Breakout from Pixel Trip Studios, a point and click adventure currently on Kickstarter and recently put through Steam Greenlight during the April 16th batch. Which describes itself as inspired by the classic Steve McQueen film The Great Escape. At this point, if you’re not already sold on the game, you might as well just quit gaming and go take up knitting.

Presenting beautiful environments and unique character models, the game is a treat for the eyes, and the concept of using point and click mechanics in a POW camp escape scenario has room for unique puzzle design and tension-filled moments that you can’t get with the guns-blazing style of traditional war games. 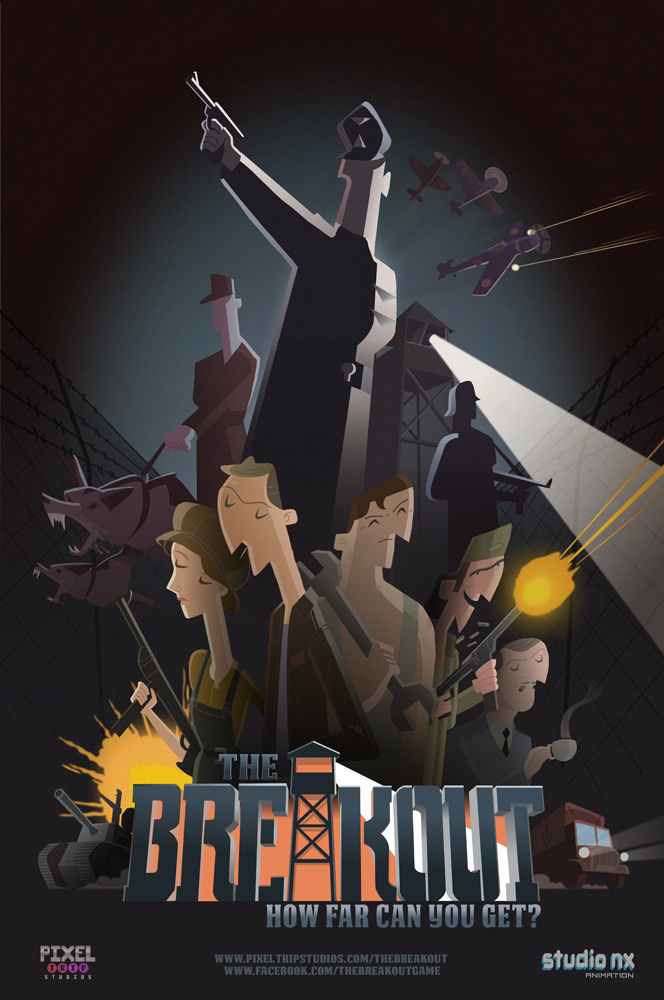 I was able to get in contact with Adam Jeffcoat, the lead director of The Breakout, about his influences in making such a different approach on the war video game genre.

“The Breakout was really born when I first played a game called ‘The Great Escape’ on the Spectrum when I was around 8 years old. As basic as it was, the idea that you had to find supplies, sneak past the guards, break the rules and eventually tunnel your way out of this POW camp absolutely fascinated me. The film of the same name was also a big influence but I felt at times it came across a little comical and I wanted to focus more on what it would have been like to be locked down by more ruthless oppressors. Mainly because the more harsh the environment the more elation you would feel when you finally break free!

Point ‘n Clicks also give the user the sense that they become the main character, they really draw you into the story and the puzzle solving is so satisfying. My approach was to take this storytelling potential but combine it with a more adult experience and add in as much tension as possible by approaching it more like a movie so you are really on the edge of your seat as to whether you are gonna make it or not.

Essentially, I am telling a story of one man’s desperate desire to break free from this ruthless environment and return home to his beloved fiancee. If I can make the player feel that they have really been on that journey too then I will have succeeded.”

So, I think it’s fair to say that the war genre of video games may seem stale on the surface, but still holds a lot of potential for unique experiences. With these three games using war as a foundation for more interesting stories and gameplay design, there is still hope that this part of society and human nature can finally be presented as a more well-rounded concept.

And hey, at least they’re not another Call of Duty game!