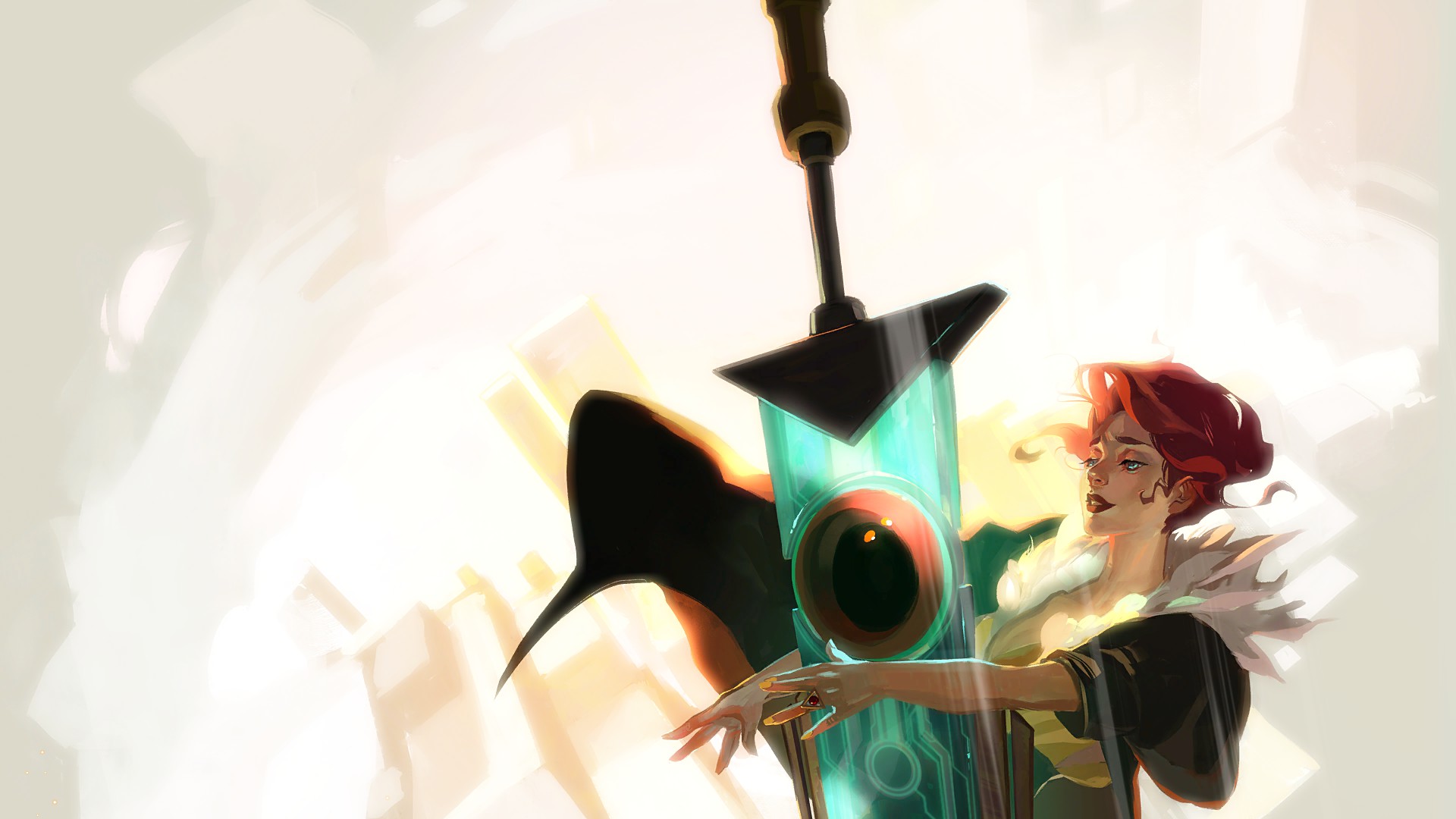 Beauty is only skin deep. While the phrase may have been coined with people in mind, it applies to video games as well. While a game may look gorgeous or appealing, once you delve into it you discover an ugly truth beneath the surface. Transistor is not a superficial beauty however, far from it. The game is a work of art through-and-through and only gets better the more you dig into it.

Is this game good? No. This game is great. I absolutely enjoyed every minute of my time with it. As soon as I finished my first playthrough, I immediately started my second run, reluctantly stopping to give you this review. It is that good. So let’s get into why you should play this game.

Transistor follows Red, a famous singer in the futuristic city of Cloudbank. A mysterious “Process” is slowly overtaking and changing the city, corrupting the landscape and birthing enemies to oppose Red. Assisting Red with her fight against the Process is the titular Transistor. The Transistor is a sword that has unique and powerful properties, such as stopping time in battle or housing consciousnesses. In fact, the sword provides the narration for the game. In Bastion, the narrator gave backstory along with commentating on the proceedings and the player’s actions. In Transistor, the sword comments on what is happening, but also talks directly to Red. The consciousness of someone who was close to Red is trapped in the Transistor and his commentary fleshes out his history with Red’s character. The narrative is somewhat vague and murky, more akin to Dark Souls than Bastion. Some may not like this approach, but I appreciate games that allow the player to delve into the lore at their leisure rather than having exposition unfolding under a spotlight. There is depth to be uncovered and lore to be found, but only to those who seek it. If a player so desires, they can focus on the moment to moment gameplay, ignoring the optional backstory, and still greatly enjoy the game.

Most of the backstory in the game is gleaned from “functions”. Throughout her journey, Red will encounter dead people. These people can be stored in the Transistor and grant access to new abilities, called functions. Each function (ability) has three unique pieces of lore associated with the three ways Red can equip it; active, upgrade, and passive. Assigning a function to a particular slot unlocks that piece of lore for that character. This approach encourages players to experiment with different abilities and their uses in combat. Further adding to the experimentation is how death is handled. Upon dying, players lose access to a function and do not regain it until a certain number of checkpoints have been reached.  Losing an ability requires the player to experiment with others they may not otherwise have used.

The function system and combat in Transistor are elegantly simple, but surprisingly deep. The four main functions, as mentioned, acts as main attacks and skills to be utilized in battle. Functions can also be used as upgrades, to enhance and alter the properties of the main skills. The passive slots alter Red’s kit as a whole, rather than a specific skill. There are a myriad of choices and flexibility in the system and it allows for a variety of play styles. Just when I thought I had a well rounded build, I would gain access to a new function and began experimenting all over again.

In battle, you can engage enemies in real time, or freeze time to plan out a course of action akin to the RPGs of old. Either approach is viable, a testament to the strength of the combat system. There are advantages and disadvantages to both approaches, but I never felt forced to choose one over the other. Many abilities also have status effects that can be applied to your enemies, further adding to the strategic depth. Formulating a plan and watching it unfold is exhilarating, and the game constantly introduces new enemies and upgrading older ones, ensuring the proceedings are never dull. The game does get more difficult later on, with some enemies that share status effects with each other, but I never became frustrated with the encounters. Transistor also allows for a flexible difficulty system. In Bastion players could invoke idols that added to the challenge. In Transistor, they are called limiters and increase experience while adding extra challenges to combat, enemies that hit harder, respawn faster, etc. 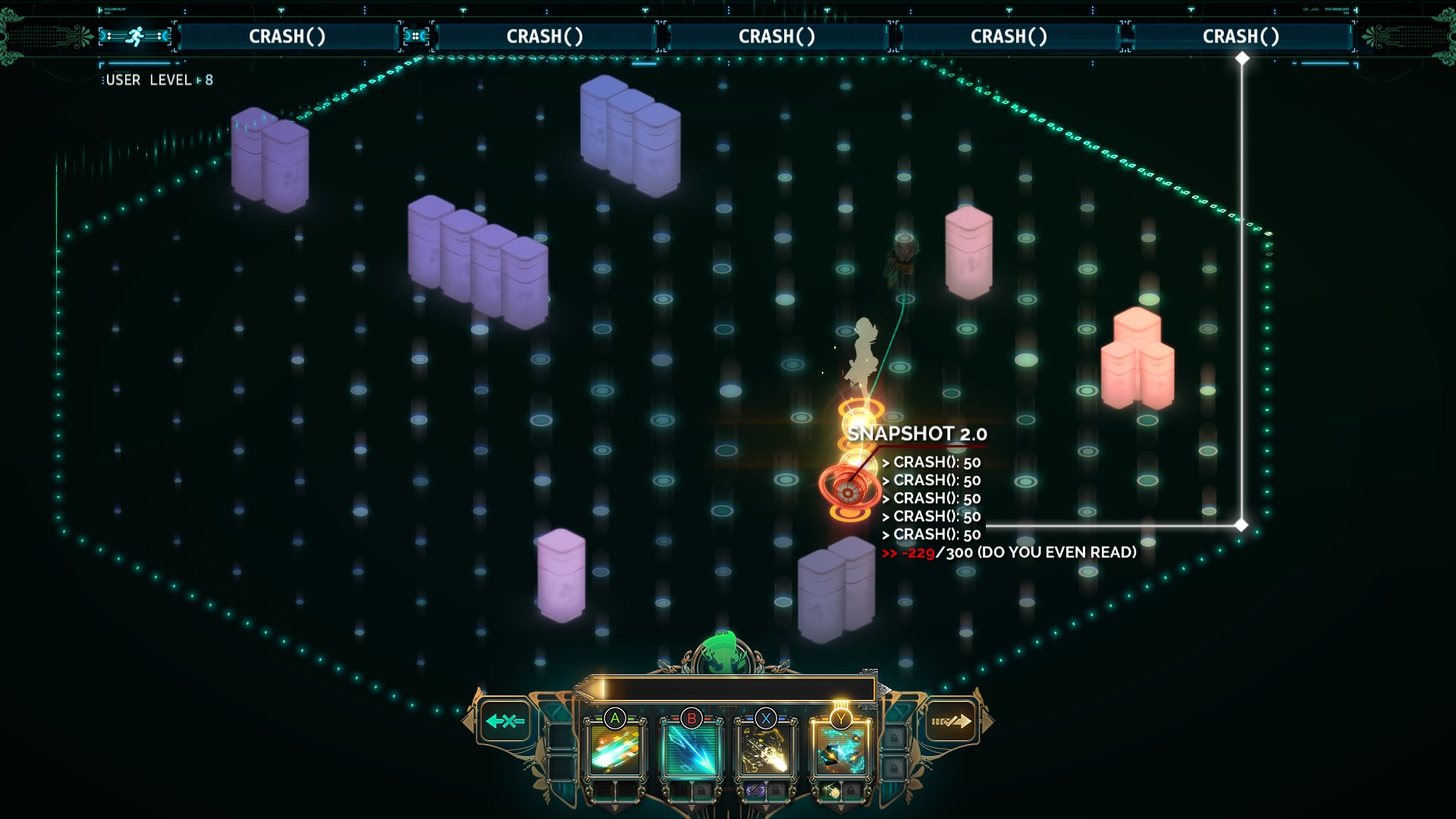 As far as looks go, the world of Cloudbank is breathtaking. The city has a unique design and architecture that adds character to a decaying metropolis. Rather than being bright and colorful like the universe of Bastion, the world of Transistor is more subdued and bleak, fitting the darker themes of the game. Red and the enemies you encounter are fully 3D, but the world around them seems to be a painting almost. This juxtaposition allows for characters that stand out from their surroundings and enhances the detached atmosphere. While screenshots are gorgeous, seeing the game in motion is a thing of beauty to behold. 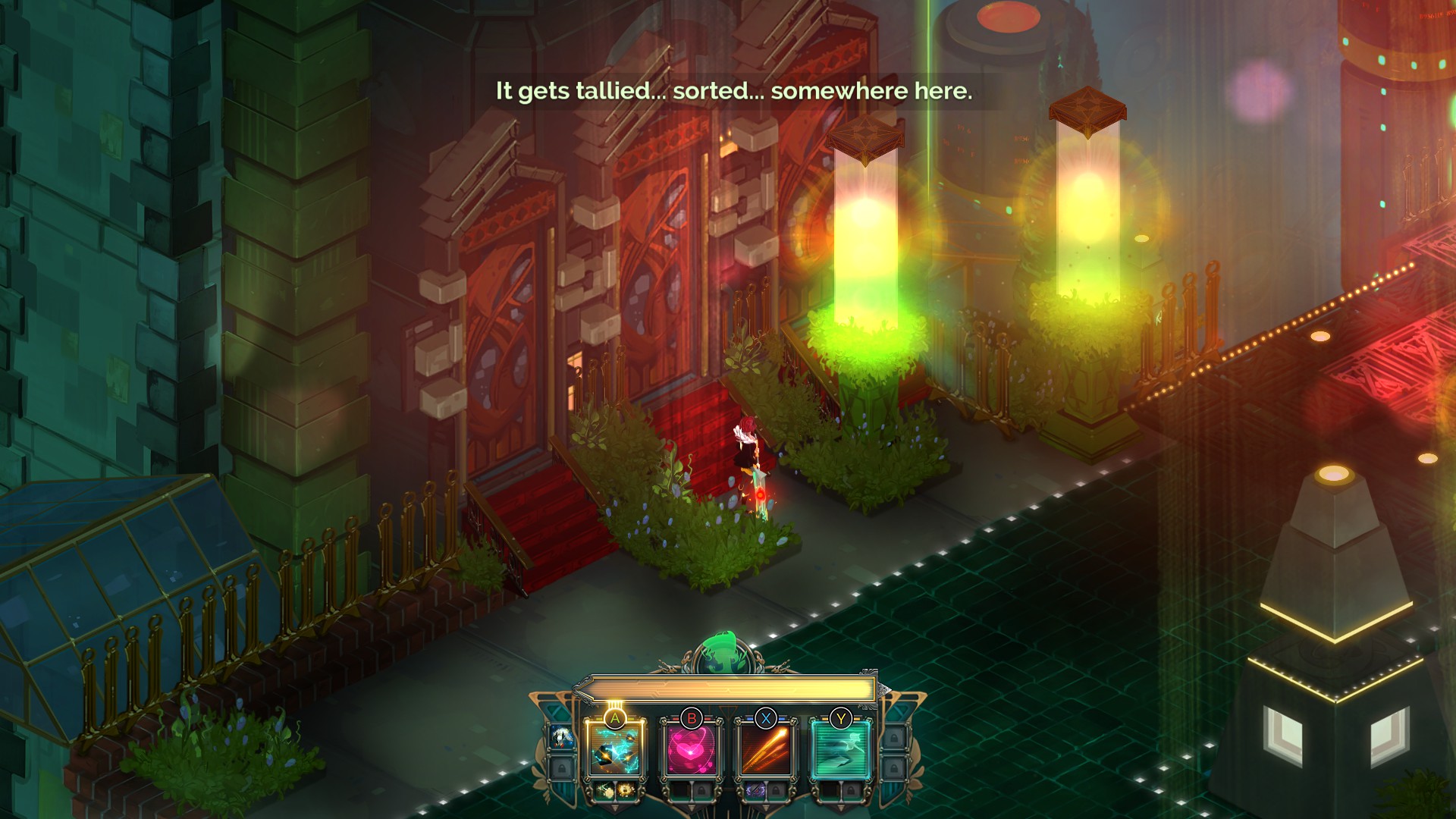 What I really enjoyed were the little touches Supergiant added to the game. When Red drags the enormous Transistor behind her, sparks emit from where the sword contacts the ground.  In combat, doing more damage to an enemy will lead to messages saying,” You are mean!” or “Do you even read?” to appear. Small aditions like these help to enforce the feeling that this project was a labour of love, not just another faceless title in a bulging game library.

Perhaps my favorite though is the humming. This game has a button dedicated to humming. When the button is held outside of combat, Red will hum a version of the song that is currently playing. All of these little touches go a long way towards endearing the game and drawing the player into the world. The title also runs well with minimal technical issues. I only encountered one bug during my time spent with it. The bug was a harmless glitch that resolved itself with no effect on the battle I was engaged in.

Of course, the soundtrack from the terrific Darren Korb is excellent as well. The music has an alien, mysterious, undercurrent that enhances the atmosphere. Ashley Barrett, the voice of Zia, returns to lend her graceful pipes for some hauntingly beautiful tracks. I recommend listening to the soundtrack after completing the game, however.  A few of the songs are directly tied to the narrative, and they deserve to be heard in context first. Transistor is one of the rare games where all of the systems complement and build off each other. The art direction enhances the narrative and atmosphere. The combat is directly related to the underpinnings of the story. The soundtrack also correlates directly to the tale unfolding before you. It is a cycle of artistry that I found myself enraptured with and reluctant to abandon.

The game is selling for $19.99 or your regional equivalent on Steam. The game will take anywhere from five to eight hours depending on your skill and how much you choose to delve into the narrative trappings. The game is of perfect length I feel. It never overstays its welcome and by reducing the time we spend in Cloudbank, the mystique of the world is enhanced.  There is a “New Game Plus” mode which you can begin immediately after completing your first playthrough. There are no additional modes like Bastion had, but there is an optional area that can be accessed throughout the game that tests your speed, planning, and resilience to enemies. This optional area also has a practice arena for the combat fanatics.

In short, Supergiant has delivered again. Every aspect of this game ties to and complements another element. The combat is rewarding and deep, yet simple and approachable. The world design’s beauty is matched only by Darren Korb’s masterful soundtrack. I highly recommend this game. Tansistor is a fantastic piece of art that deserves to be played. If you have yet to pick up this gem, you should not hesitate any longer!

The entire game! Seriously, every inch of this game was crafted with such love and attention to detail. The ending was also surprisingly heartfelt.

-Difficulty does get noticeably harder, but not frustrating

-Some may think the game is too short

-May not be as accessible as Bastion for some players

Transistor was developed by Supergiant Games and the game is currently available on Steam for $19.99. The soundtrack costs $9.99.

This review was conducted with a copy provided by the developer.