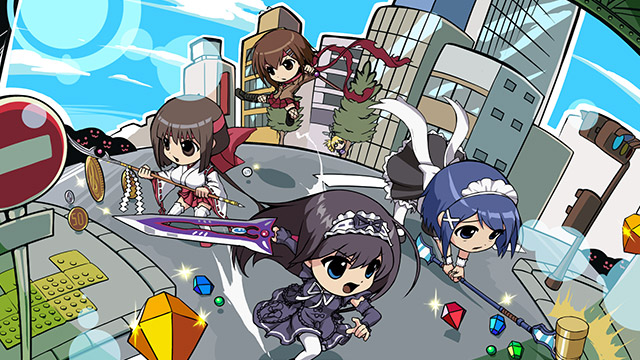 I’m impressed at how little Phantom Breaker: Battlegrounds seems to care about the platform it’s been ported to. I’m serious — the amount of consideration put into bringing this title to PC could be put into a matchbox, with space to spare. This title feels about as soullessly carted out by mandate as its banal story and characters. If you came here expecting a glowing review, you are going to be sorely disappointed. Almost as disappointed as I was, at just how poor a PC port Phantom Breakers truly is.

You see, Phantom Breakers is a port of an Xbox 360/PS Vita brawler. Your first hint to this is how every in-game prompt is a controller button, even though I was playing with a keyboard. Not only this, but you are never told how to play the game with a keyboard. You also cannot rebind the controls; there aren’t even presets to swap between. So I had to spend my first stage of the game randomly mashing my keyboard, trying to identify what keys to hit to do anything.

As Indie Gamer Chick put quite succinctly, bad controls can d*** a game before it’s even started. It wasn’t until the second boss fight that I was even half-sure about which buttons performed what actions consistently, because both visual queues and the lack of a tutorial left me to have to make sense of it in the moment. Why does the move that looks like a grapple not grapple, but the heavy attack seem to grapple? Why does the grapple only sometimes happen when I’m sprinting? Why does the button for jumping between perspectives sometimes make me block incoming attacks? Why is it that I sometimes fire out a ton of mana b****, sometimes a few, and sometimes only one at a time per-press? I never knew and still don’t.

As if this weren’t bad enough, the game is pretty monotonous from what I played. You’ll fight — creepy old guy with a cane, racist stereotype black girl, random doofus who looks like a stoner, big guy who barely makes a dent in your health, and Beavis & Butthead‘s love child, over and over again. The only new addition was a guy who threw cakes for some reason, and he actually had a habit of spam locking me because there’s almost no way to dodge his attacks.

On top of all this, the two stages I forced myself through were way too easy considering how badly I was playing. Then I arrive at the second boss fight, and I can hardly respond in time before spam lock after spam lock after spam lock gets me sent back to the continue screen. I was fighting a clone of my chosen character, who somehow had tons more moves and abilities than I did. I was then sent out the stage and back to the upgrade screen, and then it really hit me. This game isn’t interested in my skill, in as much as it is interested in seeing how effective I am at grinding.

This is clearly an attempt to make the game last longer, as I looked it up and the game is actually AMAZINGLY short (only eight stages in total). If the difficulty curve performed as intended, you could probably clear this game in a day. Heck, I imagine on Easy you could clear it in a day regardless. So in a last ditch attempt to add variety, the developers included co-op, PvP, and up to ten playable characters.

Except six of those characters have to be unlocked, and the four you start with aren’t hugely distinctive to begin with. Also, this is still a terrible port, so of course the developers didn’t bring over online multiplayer that is included with the console versions. You can play online with the Vita and 360, but if you dared to want to play this on PC, then you better have four wired controllers plugged into your PC. That’s the only way you can play the game’s multiplayer modes.

This is a game released in 2015, mind you. Yet still the developers saw no problem in leaving out a core feature like online play, just to get it ported faster. This is why we can’t have nice things…

This is a pity because it’s clear at least in the animations and quality pixel work that at least the art team had some talented people working on this game. Visually, every level is quite distinctive and the graphics look fantastic if you can get past the Moei aspect. There are even retro homages like a cameo by Bullet Bill and a Mothra-like creature. Sadly, no game can stand alone on its visuals and a few references. The sound design is uninspired by comparison, with the chiptunes being so uneventful that I hardly noticed them. The story is even worse, with all dialogue spoken in hushed Japanese, and the main plot being as incomprehensible as a sea monster’s twisted tentacles.

Also, while I had no performance issues, several players have reported serious freezing, black screen, FPS drops, and/or other issues with the PC port. There’s not really much you can do about it if you have this issue though, as the only options available are for tweaking the sound levels. Yes, seriously, I wish I was joking at this point. Phantom Breaker apparently breaks itself depending on what hardware you are running.

Phantom Breaker: Battlegrounds is like the worst parts of Dynasty Warriors and Ninja Gaiden, without any good aspects of either. There is nothing outstanding I could find in it, and really, if you have an Xbox to play it, you should just skip it and get Scott Pilgrim Versus the World. It’s a much better option. It’s got more gameplay variety, many more stages, and its boss battles are much more skill-based. Only the most brawler obsessed gamers should even consider this title.

Phantom Breakers: Battleground is currently retailing for $11.99. If you’re feeling this charitable, give the money to an actual charity. If not, that’s about three movie rentals, and you’ll at least get about just as much entertainment per-dollar. Otherwise, you get a highly repetitive, badly ported game. If you experience short-term memory loss, then it’s at least ten or so playthroughs to unlock all the characters and grind them to the highest level. You also get hours of playtime of trying to convince your PC gaming friends to come over to your house and play a game via local co-op instead of just loading up Counter-Strike or Team Fortress 2.

Just because Steam Greenlight has lowered the standard of quality for PC game releases, does not mean you can just slapdash a port on us and think we’ll take it.

Err…. I’m not thinking there ever really was one. All I seem to remember is button mashing and lots of pixelated people dying from kung-fu related injuries.

+ All in-game assets are drawn and animated excellently

+ Krieger from Archer probably would enjoy this.

– In explicable balanced, grind-heavy boss fights attempting to compensate for the game’s shortness

– Krieger from Archer probably would enjoy this.

Phantom Breaker: Battlegrounds can be purchased on Steam and digitally purchased for Xbox 360 and PS Vita.

This review was conducted with a review copy sent to us by the game’s PR agent.