Monochroma Review – An Exercise In Oppressive Atmosphere And Bleak Narrative 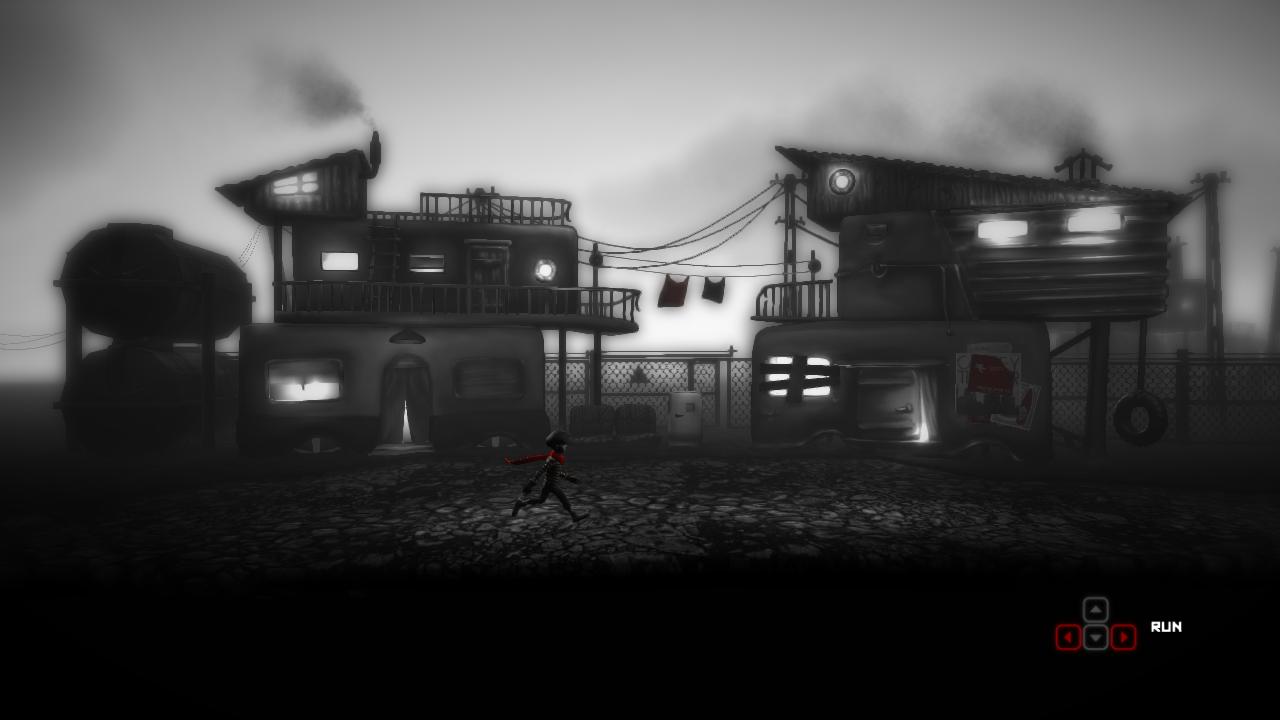 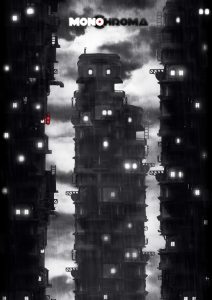 I’m always a little concerned when a game is explained to me by using other games. Monochroma says right in it’s previews that it’s been called Limbo-meets-Ico, and it wears that pretty heavily. It’s obvious right from the start where it’s influences lie, but dismissing the game on this alone is doing it a great disservice, as it manages to break free of those comparisons quickly, and set out to mark it’s own territory on the very crowded indie genre of puzzle-platformer.

A good game gives you a reason to play it. Something that drives you to push towards the end. A great game will continuously give you new reasons to continue around every turn. Monochroma falls somewhere in the middle of that. It suffers from a slightly too-long intro, taking it’s time to ease the player into it’s world, narrative, and gameplay. The early chapters don’t offer much to keep you interested. The narrative pieces don’t kick in, so the world feels like a teaser more than a set piece, and the gameplay early on doesn’t provide much faith that the experience is going to be anything more than a business-as-usual puzzle platformer. 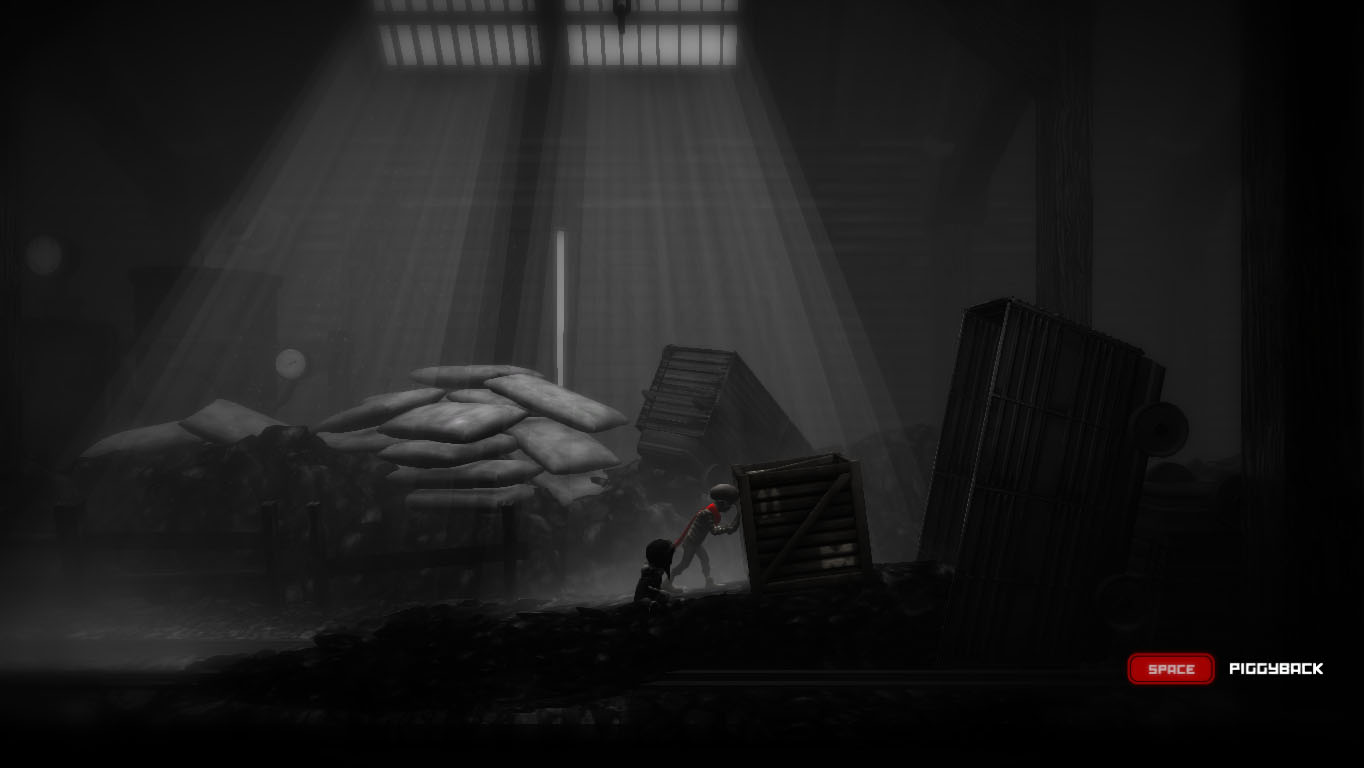 If the beginning of the game can be described as a stumbling slow-paced walk, the rest of the game is a pulse-pounding sprint. The cinematic elements of the game begin to show up and impress, and the gameplay provides just enough to not get in the way of enjoyment. But sadly, that’s all that can be said about the gameplay.

The game plays like you’d imagine a puzzle-platformer like this to play. Move boxes, swing from ropes, avoid deadly obstacles. It’s all very standard, and it never does anything remarkable or outstanding. But sticking to a formula isn’t always a bad thing if that formula isn’t broken at any point along the way, and Monochroma manages to keep it’s gameplay from being frustrating or annoying. Never once did I feel like the game was being unfair or forcing me to stop moving to struggle against it. It wasn’t trying to beat me, it was just trying to keep me engaged, and it achieves it’s job. The main challenge of the game comes from occasional chase sequences and move-fast action moments, and while none of these are anything mindblowing, they’re just enough to quicken the pace and get you back into the game.

There is occasional trial-and-error moments in the game where you’ll find yourself dying due to experimentation, or simply missing a jump during the faster paced moments. And this wouldn’t be a problem if it wasn’t for the loading screen you get booted back to every time you die. Forcing you to press a button to continue and respawn. The checkpoints are generous, but it grew tedious having to go through this screen every time I had to restart. Especially in a genre that has instant respawns in most every key title. It won’t suck the fun out of the game, but it’s still a minor unnecessary issue.

While the main game is mostly linear, playing out as a series of puzzle rooms connected by some platforming moments, there is also the occasional secret to discover in the form of little flowers hidden in the world. Unfortunately, these seemed like missed opportunities to add extra narrative depth to the game, instead acting as pointless collectibles that don’t really benefit the game’s focused design. They’re there for achievements, but don’t really work due to feeling counter-intuitive to the game’s core intentions. They’re not particularly well hidden, nor do they make you want to spend time exploring random nooks and crannies. They could have been removed from the game and nothing would have changed. But I suppose if you’re into collectibles, they’re there.

The main unique twist to Monochroma’s otherwise standard approach to the genre is your characters. You play as two brothers, one of which is wounded early in the game. As the other brother, you must carry your injured sibling around on your back. As you’d expect, hauling another person around slows you down and prevents you from progressing sometimes, and so you must occasionally leave him behind to venture forward. You can only do this by finding a light source to leave him in. Without him, you can jump higher and get further, but you also can’t progress too far ahead, so you must always find a way to go back and retrieve him.

This sounds like a clever mechanic, but it unfortunately never quite lives up to it’s potential. I never found these segments particularly impressive, and the “oh, a light source… guess I’m leaving him behind” predictability never makes it feel like a puzzle as much as another simple obstacle. The one thing it did do was occasionally add some slightly frustrating timing-based puzzles, but nothing unpleasant or annoying. It was just enough of a different concept to give Monochroma a feel all it’s own, but I couldn’t help feel like it could have been done in a more organic and interesting way, perhaps by removing the light source element entirely so as not to reveal when you’d have to use this particular feature to progress. 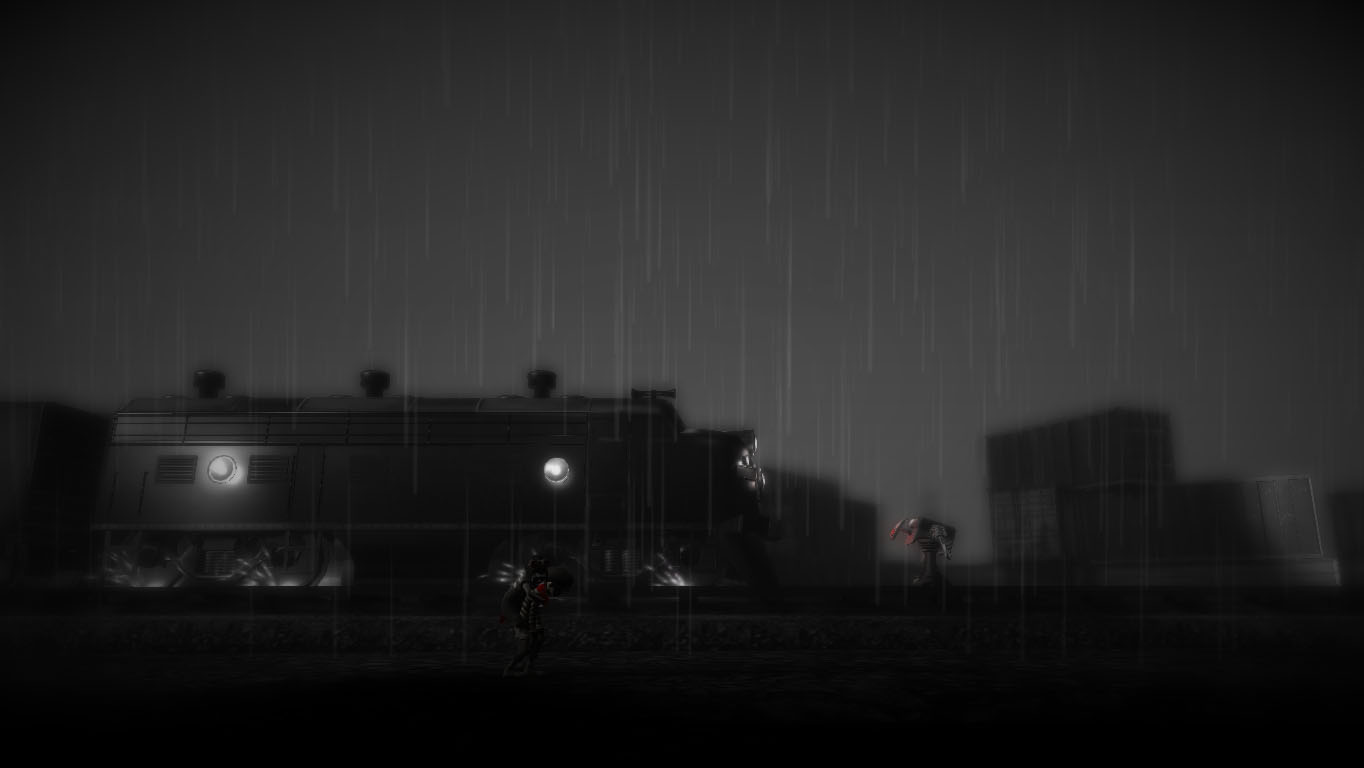 That isn’t to say Monochroma doesn’t impress with it’s level design. It does. Quite a bit, actually. Not in the puzzles or platforming challenges necessarily, but in how they’re worked into the world. Unlike most platformers, which play like a series of random objects scattered around a playground, Monochroma’s obstacles fit naturally into the game’s myriad of environments. This was what impressed me right away. I felt like I was adventuring through a very real place, moving around dangers that are supposed to be there. Very rarely do things look out of place, giving you a very satisfying feeling of environmental interaction. And this makes even the most basic of gameplay moments a bit more exciting and engaging. Swinging on a rope or jumping from a crate is far more interesting when they’re not just randomly there.

Monochroma’s environmental design is it’s strongest aspect. The world was an absolute joy to be in. With a surprising amount of detail and depth for a 2D-plain platformer, Monochroma gives you a reason to actually pay attention to it’s backgrounds and what objects you’re interacting with. Every room you’re in serves a purpose in this world, and figuring that out is another puzzle all it’s own. From the deforestation you witness early on, to the cluttered slums of low-class living sectors, you get a sense that everything you see matters. You’re not just taking a tour of random environments, you’re witnessing the backstory of a narrative told through nothing but visual clues and well thought-out world building.

The atmosphere of the game is heavy. The monochrome (get it?!) visuals are broken up with occasional splashes of red that point out little details in the environment that seem worth considering, which breathes a little life into an otherwise dead, cold world. My main complaint with the visuals was that even with the brightness turned all the way up on both the game and my monitor, I would occasionally still lose some things in the shadows. An obstacle that was hard to make out, or a jump that led to a platform that wasn’t there. This doesn’t happen often, but it was frustrating enough to mention.

This benefits the game’s real focus: storytelling. And Monochroma has quite the story to tell. Taking place in an alternate 1950s, the game plays out as a representation of the fear of over-industrialization, technological advancement to the point of losing what makes us human, and corporate oppression. We’re meant to feel for these children as they struggle for survival in a world where the lower class seems to be more of a resource than a population.

When the game introduced itself as “cinematic” I was worried it’d take the modern game design meaning of the word, which is usually flashy cutscenes and low-interaction action set pieces, and simplify it down to boring little moments. But Monochroma shrugs off this stigma and presents a REAL cinematic experience. Full of subtle nudges and nuance, the game doesn’t blatantly spell anything out for you. Early on, you get a tiny eyebrow-raising detail, that you’re not allowed to sit and study, which drives the second half of the game’s narrative in a direction that is completely unexpected, and putting it frankly, terrifying in it’s implications. Without the use of dialogue or movie tricks, this game lets you discover it’s story simply by living it. Like breadcrumbs leading your way, you’re never given straightforward answers. The player is left to piece together what they’ve seen and witnessed themselves.

Unlike a lot of games that tell their story through hints and details, this game never feels obtuse or hard to follow. The story flows nicely, and presents itself in a satisfying manner. I immediately appreciated the story and it’s meticulous design. There was an obvious attention to detail here, and it presents a story that’s flawlessly paced, beautifully executed, and unique enough to stand out in modern gaming as something worth experiencing. If you’re looking for a slightly creepy sci-fi story that makes a few bold statements about the current state of our world, this is a game that won’t disappoint. It knew everything it wanted to say, and it says it with the kind of finesse that seems to be oddly missing from most bigger story-driven games.

If you’re looking for a puzzle-platformer full of clever gameplay only, Monochroma might not keep you occupied for too long. But if you’re seeking a game with a rich world to take in, interesting narrative to unfold, and discussion points to bring up, there are very few games in the genre that hit all the right buttons in the way Monochroma does. It was very sure of itself and, aside from some minor hiccups, it reaches it’s mark about as well as could be expected. It’s not an instant classic, but it does enough of note that I can easily recommend it. It never holds you back from enjoying what it does well, but I couldn’t help but feel like there was still room to turn it into something even stronger.

Utilizing tiny splashes of red color to punctuate the black, white, and gray environments proves to be an effective way of providing a sense of importance to the detail in the background. It also allows for the otherwise oppressive atmosphere of the game to be broken up and provide a strange sense of hope and life to an otherwise cold, frightening world.

+ Oppressive, Eerie Atmosphere Presented Through Great Use Of Color And Sound

– Fairly Standard Gameplay That Never Does Much To Impress

Monochroma was developed by Nowhere Studios and will be available on Steam on May 28th. You can also purchase it directly from their website for $19.99.