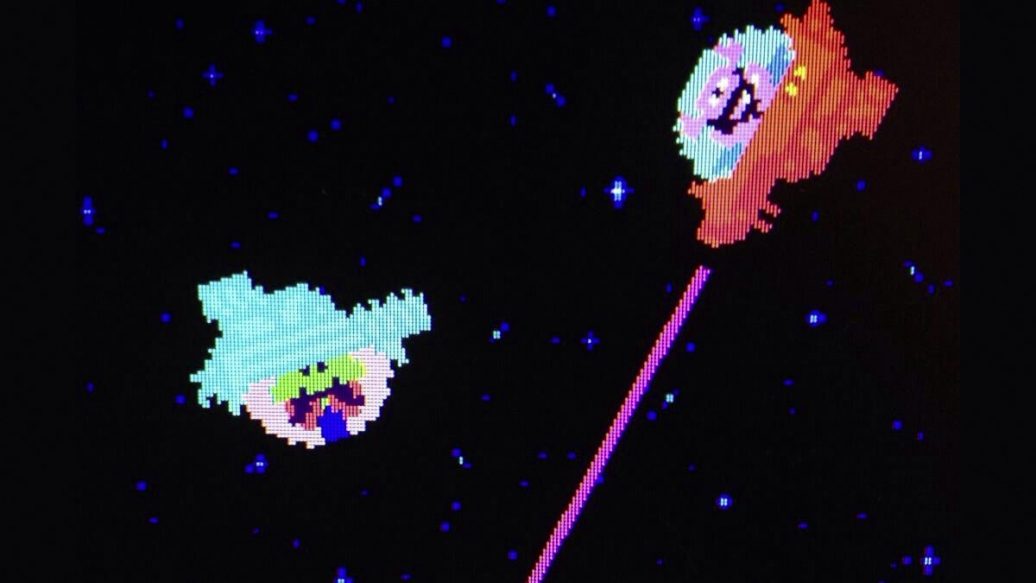 If you look at the lecture notes for ‘I’m a Transsexual Witch Poet Gamecrafter and You Can Too’, a talk that Merritt Kopas gave at IndieCade East earlier this year, about halfway down page four you’ll see three words given the benefit of capital letters and the proper breathing room to make their point known.

However, Merritt isn’t simply pushing some anti-mainstream agenda when she decries polish. “I think that it’s interesting that in other forms, we can talk about something being overly polished—that’s a criticism that people can make of film or music,” Merritt tells me when I ask her about the statement. “It’s not a criticism that you hear of games very often.” The way Merritt sees it, the expectancy for video games to have a certain level of audiovisual polish is something that routinely discourages people from experimenting with game development. “The reason I said polish is poison is because of all the games that are never made because people don’t have the skills to live up to that ideal,” she says. “That standard of technical polish is really limiting to the kind of games that circulate, and that’s really unfortunate.” There’s no sense that Merritt thinks there’s anything intrinsically wrong with AAA video games being created—other than that they have a tendency of discouraging the individual from creating their own, less polished experiences.

“Really, it’s not something that new,” Merritt continues. “In the seventies, in the eighties and in the early nineties, people were making their own games. That’s a thing people did—maybe it wasn’t as easy as it is now, but people were doing it.” The indie scene has flourished in the past few years, being embraced by the mainstream far more readily than they have been in the past. However, there’s still a lot of great games that get made only to struggle to find a way of reaching their audience. That’s why as well as being a lecturer and a creator, Merritt is something of a curator of video games by running a web site called forest ambassador.

Simply offering links to the games themselves and a few tidbits to pique your interest, forest ambassador provides a near-constant stream of interesting and unique video games that are free to play and don’t require a huge time investment. For the hours that people spend cyclically debating whether or not video games are art, you have to wonder whether a brief spell browsing forest ambassador wouldn’t clear up the issue rather more quickly. In just the past few weeks, Merritt has used the site to publicize games ranging from an interesting twist on the platformer genre to a minimalist first-person audio-visual experience to a study of sexual fluidity via the mechanics of a fighting game. It’s rare that there’s not something new and compelling to play through on forest ambassador, and if you’re not a regular visitor it’s perhaps worth reconsidering that position immediately.

However, whilst Merritt’s efforts as a lecturer and curator are certainly worth taking notice of, it wouldn’t be right not to also make a fuss of her work as a game developer. If you haven’t already played her much-discussed Lim from 2012, it’s a perfect example of not only the sort of deeply personal game that this sort of independent development can accomplish, but also a robust explanation of her thoughts on polish. Lim simply wouldn’t work as well if it was made by a team of hundreds, or if it was as polished as your average big-budget title, and that’s something Merritt seems well aware of.

Taken from Lim by Merritt Kopas

“It was kind of an experiment,” Merritt tells me. “I wanted to see if I could make something using a lot of the vocabulary of games to tell a story that doesn’t really get told very often.” Feeling that plenty of people had already written about the subject matter that she wanted to explore, Merrit wondered whether a video game could be used to better express her thought. Lim is a fascinating experience and was widely praised upon its release, with good reason. Using simple visuals and mechanics, it makes its point very succinctly, something that’s rare even amongst this type of game. “If I’m trying to tell a story in the format of a game, I don’t necessarily want cutscenes or dialogue or anything,” Merritt says of her process in making the game. “If I was going to do that I would just write a story.” Whatever you take from your experience with Lim, it’s clear that there’s a lot going on underneath its simplistic exterior—it’s very much a game that has a lot to talk about. With that in mind, Merritt’s current project might surprise you. When I asked her about Space/Off, her upcoming collaboration with Anna Anthropy, it certainly seemed to sound a lot more like conventional video game fare than her previous work “It’s more traditional and game-y, certainly. There’s spaceships in it, there’s lasers, all those traditional video game elements.” Inspired by Merritt and Anna’s shared love of the classic Star Control, Space/Off is a competitive offline two-player contest that offers several different events in which players can space off against one another. “It’s kind of a weird departure for both of us,” Merritt says. “I guess its more in the vein of the e-sports trend that’s happening right now. For me it was just a case of I wonder if I could make something like that.”

It says a lot about the many ways that Merritt has already tested the boundaries of what makes a video game a video game that she describes this seemingly very traditional video game project to be her way of breaking out of her comfort zone. It’s certainly an exciting prospect for anyone who’s a fan of her work to see her not only collaborate with the very talented Anna Anthropy, but to do so in a game that will no doubt do some very interesting things with the interactions between its two players. If you want to follow development of the game, you can do so via its official tumblr blog which is regularly updated with various morsels detailing its progress.