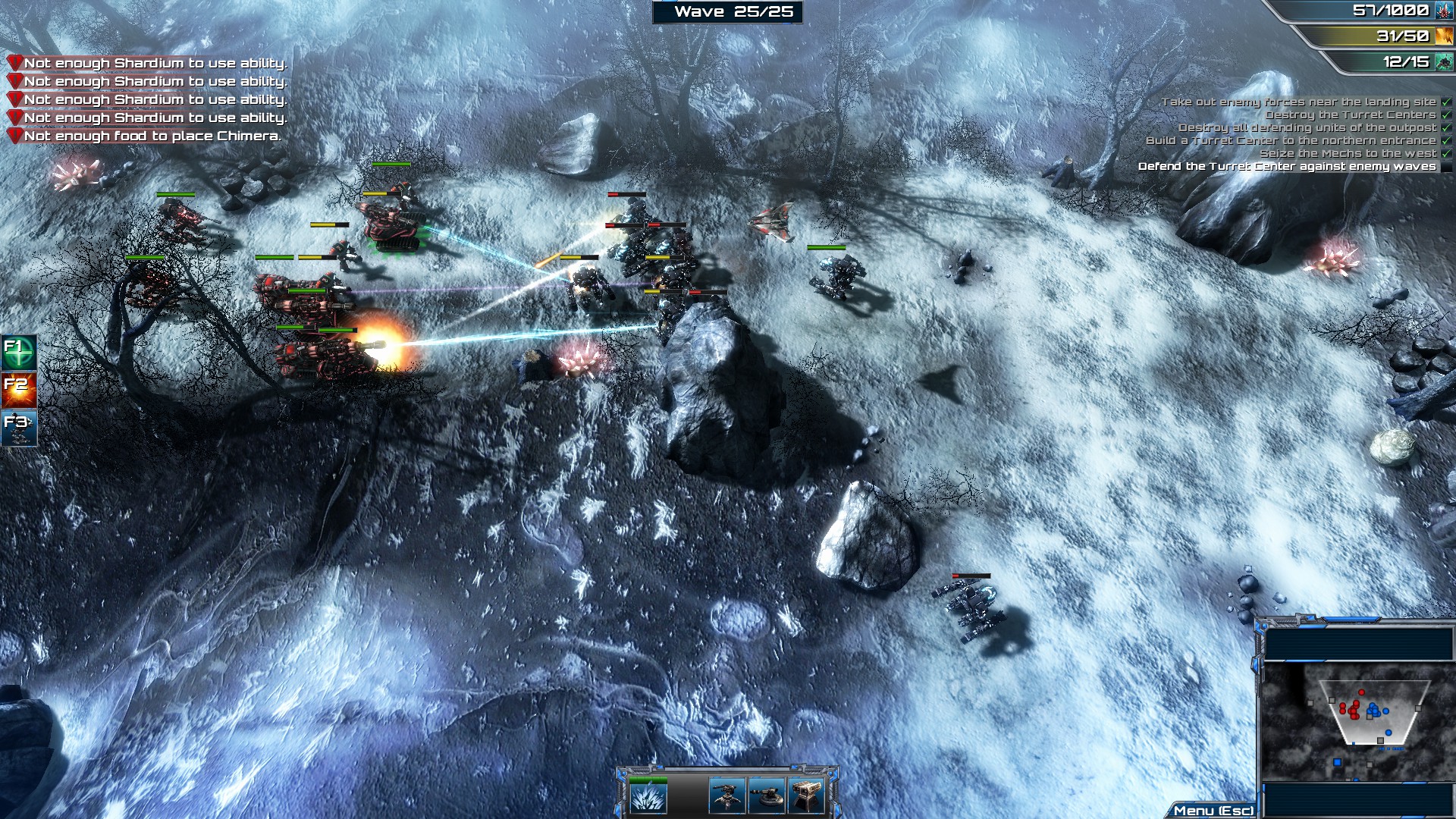 Meridian: A New World is a sci-fi real time strategy game being developed by the one man team of Elder Games. Yes, this is a one man team making an RTS game. While he has had assistance from some individuals in areas, at the end of the day, this one guy has done the most work on the game. Now that we’ve addressed the elephant in the room, let’s get down to brass tacks.

As the game stands now, I really cannot recommend it in its current state. But let’s delve deeper into the reasons why.

This game unfortunately commits the cardinal sin of games; the game is rather boring. As much as it pains me to say, the game is just dull. Rather than being excited for the next mission and eager to see what the game had in store, I felt like I was plodding through the missions, just ready to get through what the game threw at me. One of the largest problems are the units you command. I can forgive an uninteresting story if there were interesting or unique units to command. Sadly, the units on display are anything but. Meridian owes a huge debt to Starcraft, which seems to be where the developer got most of his inspiration. Of the two infantry units available in the game now, both seem to have jumped from Starcraft to Meridian. The Chimera mechs also look an awful lot like the Madcat from the MechWarrior franchise.

There is nothing wrong with being inspired by other games, but the unit designs seem to just lazily copy other established franchises and the results comes off as banal. None of the units are impressive or appear interesting, which is a major issue given the game is a sci-fi RTS. Also, there aren’t enough units period. Right now, there are fewer than twenty units, which is rather small for an RTS game. Again, I could forgive a small selection if the units were extremely unique or interesting in some way, but once again, that is not the case. Meridian tries to compensate for the limiting number by allowing you to select loadouts for a few units, therefore changing the unit’s role in combat. I like this idea, but now it needs to be fleshed out more. Right now you simply decide whether some units have Weapon A or Weapon B and watch them do more damage to a specific unit type.

The gameplay is pretty standard for an RTS, with some exceptions. In the screenshot above, on the right side you will notice icons corresponding to keyboard keys. That is your “commander power” selection. You can heal units, increases firing rates, and directly damage enemies among other things. As you progress through the game, you earn experience to unlock or strengthen your powers. While the concept is interesting, I found myself ignoring the powers for the most part. The only powers that I found to make a noticeable impact were the heals and direct damage. The damage is very negligible however,  so I mainly used heals. In the end, I also ended up forgoing heals and simply mass producing units because healing simply delays unit death for a few seconds in a firefight.

The unit design sadly makes battles bland as well. You simply make the units you want, or make some of everything, and throw your troops at the enemies. The campaign does try to mix things up with some decent mission lengths and objectives, but there is not enough here to differentiate each mission besides the objectives. I know most RTS games have similar missions, but that is where each game uses unique mechanics, art, units, or something else to make the proceedings interesting. And this game just does none of that.  Oh wait, I remembered there is a tower defense segment. Yes, tower defense in an RTS game. It is about as interesting as that last sentence was. The game strips you of your units and forces you to rely on turrets and your direct damage power. Towards the end of the segment you are granted mech access, but by then it was all I could do to stay awake at the keyboard.

The game also lacks that “OOMPH” factor. The sounds and impacts of the weapons lack any weight or power. When I am commanding a mech using laser weapons, a sense of power and great sound effects are to be expected, but do not expect that from Meridian.

Your troops also have A.I. problems. Specifically pathfinding issues. Several times I collected my units in a mass to send them on their way, only to have some break off from the group to try and blaze their own trail for some strange reason. From time to time my units also incessantly walked between two points for no apparent reason and without orders to do so. However, you can expect your units from the other side of your base to somehow sense danger and come fight the new adversaries. They have Spidey-sense for danger, but can’t follow their fellow troops? How do they train these people?

Unlike in most RTS games, Meridian has a narrative and a focus on the narrative. Unfortunately, it is not very interesting. Maybe once the entire game is released and I receive access to the entire picture, I might be compelled to give an iota about the events and characters. Until then though, the game can’t muster enough interest to engage me. After each mission, you also walk around your ship. You can talk to people, access unit information, and attempt simulated battles. But the speed at which your character walks is agonizingly slow, making progress in these sections tedious to say the least.

And there is no zoom function.

This is a shame because the game is quite good looking, especially considering it is the efforts of mostly one guy. Many times I found myself fruitlessly wheeling my mouse wheel to get a closer view of the action to no avail. The graphics are the best thing about the game. While the art direction is nothing special, the game does feature some impressive landscapes and environments in which to do battle.

What does your purchase include?

Right now your purchase of $14.99 or $29.99 on Steam nets you five campaign missions and a basic skirmish mode. The developer has claimed there are seven to eight hours of gameplay from the missions, but I have played two hours and am already at the end of the campaign. The skirmish mode is very basic. You select a map, the number of AI enemies, and their difficulty. There is Steam Workshop support, but the mode is still basic, and the lack of multiplayer is a major handicap. I am not a fan of multiplayer being forced on games, but multiplayer greatly extends the lifespan of RTS games and ensures players never grow bored of the skirmish mode and AI. There is an audience for this too. H***, people still play the original Command and Conquer games online! The developer has stated that he wishes to focus on the campaign, which I do understand. However, with the rest of the game being “meh”, multiplayer could go a long way to making things more interesting.

I might seem harsh on the game, given it is a one-man project. All the press surrounding the game seems to only focus on that fact though: that it is a one-man project. While it is impressive, the end results right now are nothing noteworthy. When you release a game in a very competitive genre and expect money for your game, you have to deliver in some way. Right now, Meridian does not. I do hope future updates address some of my concerns and problems.

Being Early Access, this is not a review so much as my impressions of the game. Since the game is Early Access, note everything I mentioned may not be an issue in the future. Until I hear of some future updates that alleviate my problems with the game though, consider these my final words.

The game really looks impressive for a one man project, the definitive highlight of the game at the moment.

Meridian is in development by Elder Games and is currently on Steam Early Access for $14.99.