How Far is Too Far? Censorship and Storytelling in Games 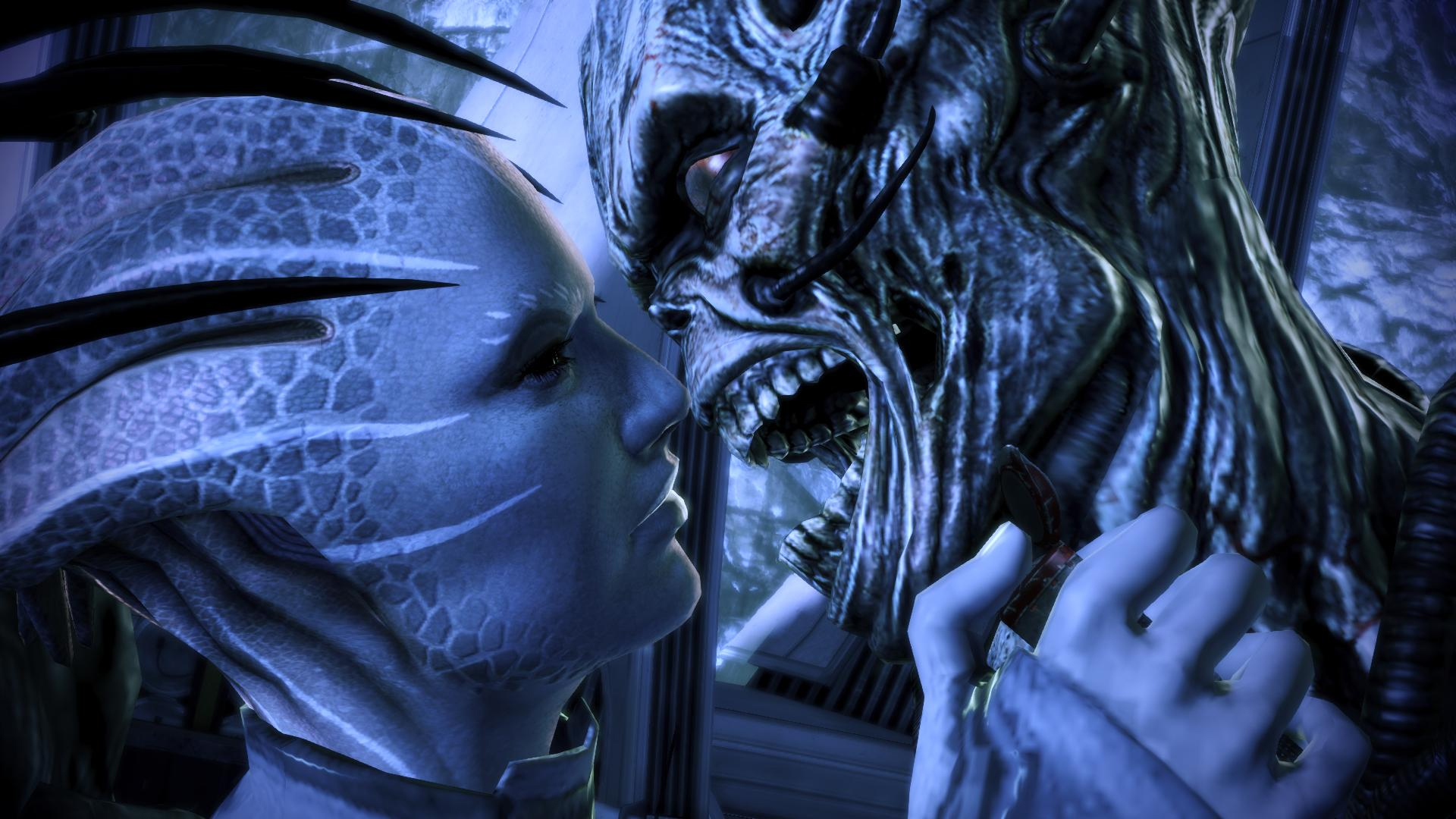 Reading about a pair of girls who tried to murder their friend in order to meet Slenderman, I was struck by two things. One, while it is a tragic story, perhaps even more depressing is how utterly unsurprising it is these days. My reaction, which should have been one of utter shock and disbelief, was more along the lines of a weary, “Oh no, not again.”

Two, it’s only a matter of time (if it hasn’t started already) before the media and the less-than-informed masses start crying from the hilltops that creepypasta fiction, along with rock n’ roll, horror movies, and M-rated video games, incites violence, promotes crime, and opens the door to drug use and demonic possession. Because, you know, scientific studies that prove otherwise are all just government conspiracies to keep us in the chaotic dark. Or something.

Obviously, I’m one of those crazy people who fell for the conspiracy and believes that the idea that any form of artistic medium is the root cause of psychotic breaks like the one those two girls apparently experienced is completely and utterly asinine. If someone’s going to snap, they absolutely don’t require a video game to trigger it – people have been driving themselves over the edge since long before the advent of modern technology. Did the Marquis de Sade get thrown into prison and an asylum for being – well, a s***** – because killing hookers in Grand Theft Auto lost its appeal after a while? (The answer you’re looking for here is “no.”)

Causing mental breakdowns and creating anarchy in the streets (and not just in the U.K.), however, isn’t the only reason critics have cited for supporting censorship in gaming. Sometimes, they’re just plain offended that someone had the nerve to put this controversial line of dialogue or that unspeakable violent and/or sexual act into an entertainment medium made for mass consumption. “It’s blasphemous,” they complain. “It’s disturbing.” “It’s morally wrong.”

I’m tempted to mock first and ask questions later, but in all honesty, I understand the rage, though my personal vendetta is slightly less defensible. Torture in a game? Fine, let’s get it over with. Rape? I’ll survive. (Because let’s not forget, kids, it’s all just zeroes and ones in the end.) Kill one innocent little kitty cat, however, and my mood instantly accelerates from zero to rage-quit. Aside from what this may say about me as a person (let’s not even go there), the point is that I do know how seeing something one finds utterly detestable in a game can make the idea of going on some self-righteous crusade all too tempting.

So what do I do when a cat dies in a game? Here’s what I don’t do: I don’t write hate-mail to the developers blasting them for their inhumanity and obvious psychological issues. I don’t post some scathingly sarcastic review on the internet detailing just how deplorably unplayable the game is, or write letters to the editors of high-circulation magazines whining about how terrible it is that we allow such filth to be published in our society.

Instead, I take a break. I stew about it for a bit, fuming silently to myself about the state of the video game industry and the human race until I finally run out of steam. Then, if I find the game is still worth it to me after all, I go back and hit “play” again – and if not, I uninstall and never look back. Why? Because ultimately, this is my problem, and no one else’s. If I don’t like it, I don’t have to play it. No one is making me, because it’s my choice, and mine alone.

By the way, I know what you’re thinking. (Maybe.) You’re thinking, what about kids? No one, at least no one sane, wants their five-year-old playing Dead Space, no matter how convinced said child is that it’s the best thing since the invention of Batman. To this, I say, hey, remember those funny little labels on the back of the box, the ones that say things like, “Rated M for Mature”?

The world would be a much better place if every parent paid proper attention to those, because once again, trauma inflicted on a child exposed a decade or so too early to the likes of God of War is not, by any stretch of the imagination, the fault of the game’s creators. It’s the fault of the parents, whose primary objective in life should be watching out for their children. Is the parental force field infallible? Of course not. Sometimes things slip past the filter, and sometimes kids get sneaky and get around it. Things happen, but that’s part of life. Telling developers to stop making violent video games because they give kids nightmares is like telling car manufacturers to stop making cars because leaving a kid in one too long can be fatal.

ESRB ratings aside, does that mean that anything and everything should be fair game in gaming? I would say yes – sort of. The one thing I do think deserves to be censored in gaming is hate speech. I don’t mean dialogue that involves hate speech. There’s nothing wrong with telling a story about a character who is racist, or sexist, or anything else-ist. There is, however, something wrong with a story that is actively telling the audience it’s acceptable to go out and do or say certain damaging things in real life.

It can seem like somewhat of a fine line, I admit. It’s the difference between Call of Duty and Muslim Massacre, or Heavy Rain and RapeLay. It’s the difference between discussing moral failings and crime in a narrative context and saying, without a trace of irony, “Hey, this debasement of humanity thing is actually pretty fun! You should try it sometime!” The problem with censoring it is how hard it would be to defend in court, or even just in public discourse, not to mention how easy it would be to manipulate and exploit.

Luckily, there are other ways to keep the creeper factor in gaming at a minimum, and it’s just as easy as my earlier advice: if you don’t like it, don’t play it. Publishing companies: if you don’t want to promote it, don’t publish it. Hosting sites: if you don’t condone it, put it in your Terms of Service and ban the jerks. Gaming-related publications: don’t give it the press the developers want, give it the press it deserves, i.e. none. The surest death of a video game or developer is a lack of attention and revenue; without these, egos implode and wallets turn to dust, making a second tasteless attempt that much less likely to follow.

Still, at the end of the day it’s not enough simply to say that we don’t not need censor-disapproved features in our virtual entertainment. So the real question is: do we need blood and guts and crime and s** in our video games? I think so. Not every game, obviously – no one wants to see Kirby in a thong, for instance – and preferably it would be done with good taste. Tasteful or not, however, the important thing is to keep the dialog, and the possibilities, open.

The darker side of gaming isn’t just there for our own twisted amusement. The presence of these not-so-family-friendly narrative elements can lead to a better understanding of both ourselves and the world we live in. The cruelty and bloodshed in war games (the good ones, anyway) reminds us that real war is no game, and that real soldiers don’t get to hit “restart” when the going gets rough. Horror games let us face our fears, even those we’re not likely to encounter outside of a digital world. In fact, some games have been used to treat serious phobias, including Half-Life (for arachnophobia) and Unreal Tournament (for both arachnophobia and claustrophobia).

As for s**, yes, so far it has played mainly gratuitous and frequently unnecessary parts in what might otherwise have been solid video games. I could certainly do without the heroines sporting size quadruple-D b****** and running about in the middle of serious battles clad in stainless steel thongs and little else, or those creepy erotic games that condone rape and pedophilic acts as long as the girl is cute. Yet standing counterpoint to these are titles like Mass Effect and Heavy Rain, which earn their “M” ratings with scenes which, while unmistakably adult in nature, also add to the plot and characters. Titles like these raise serious points about relationships and intimacy, not to mention (at least in the case of Mass Effect) issues of same-s**, interracial and even inter-species couples.

In the end, all art, be it video games or any other medium, is a means of exploring reality, both as it is and as it could be. To try to censor or place limits on such exploration, such freedom of expression, would, by extension, be an attempt to limit the scope of our collective imagination, and it could cost us more than we may realize. Both life and video games are balancing acts. It’s like adjusting the gamma levels before loading the first level of a new game. We need a balance both dark and light to see the big picture; otherwise, we’re playing blind.