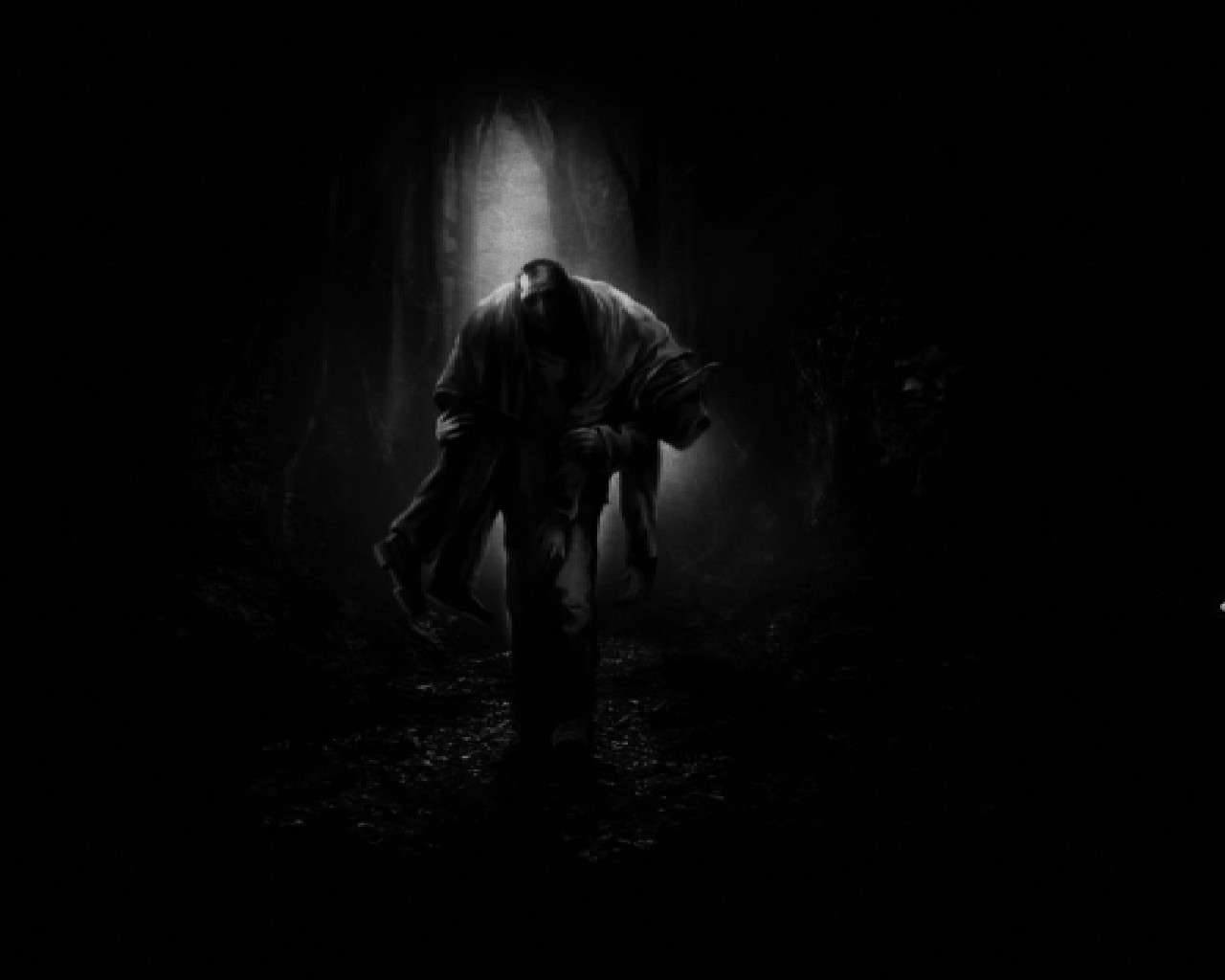 It takes a lot to scare me in a game, many titles both AAA and indie have failed, so it was a pleasant surprise when I was genuinely unsettled and tense while playing through the Early Access build of Darkwood. The most terrifying event happened fairly early on as well. I was tucked away inside my cabin, the generator growling away as it guzzled what fuel I had been able to scavenge on my first day in the game. I had dragged both the available lanterns into the living room area, which was mostly closed off save for one gap blocked by a piece of furniture.

Except that didn’t stop a dog from trying to break through another room. I could hear him on the other side of the door, snarling every so often, but still, everything seemed fine, all things considered. Then a beast that looked like a man with an upside down spider for a head shoved his way past the furniture and into my cabin. I had no weapons on hand, my last one broken only a little while ago fending off a particularly hostile wolf, so I had to run for it. I lured him far enough in to slip past and then proceeded to run like h***. I quickly hid in the generator room but he was right behind me, slowly meandering through the dark towards the sound of the machine. I switched it off and then ran around the other side of the building through a hole in the wall. I sat there for a good while, out at night with no light source or weapons or useful supplies to fend for myself, other than a single glass trap. I just sat there all the while, waiting in fear of any more things creeping in the night until morning finally came.

That all happened without scripting, and without hundreds of polygons detailing every inch of my enemies. This was purely from randomly generated content and my own actions. If that doesn’t express to you how good Acid Wizard’s Darkwood is, I don’t know what else to say to convince you. The game is brutally difficult, but still in a manner that is fair and respects the player. Knowing what locations to visit by scouting around and knowing what upgrades you want to unlock is something learned, but like in Dark Souls, once you’ve learned, it becomes that much easier and natural. Perma-death is an option for those who want even more tension, but beginners should be happy that all you lose from dying is a reset to your upgrade tree.

Other little ins and outs will also differentiate the experienced from the beginners. The mushrooms you use to level up will poison you if you step on them in haste. Dogs can be a dangerous gamble when approached unless you unlock the right perk. Story-centric areas are a whole ‘nother ball game of danger entirely and can be handled in multiple ways. From spectral ghosts that try to scream and threaten you out of the ground they occupy, to disturbing creatures that seem like something out of a Guilemo Del Torro horror film, even the most prepared survivor can be caught off guard. Knowledge is power in this strange world, and cryptic riddles are often handed to you when you try to make sense of it all. Even the game’s prologue takes a twisted turn that will shock you the first time through. The slow unraveling of every mystery and misstep to avoid, combined with the gameplay, just feels right.

The current crafting system requires you to pause and access things from your inventory one by one like in Minecraft, but then you can immediately equip whatever weapon or item you’ve put together. You can take heavy damage quickly, but so can enemies. You have to wind up your melee attack before striking, but can also move faster than most enemies and hit them from behind, dodging their attacks. Traps can be set around your home base and you can barricade windows and doors. Most supplies can be used in a number of ways; from being built into weapons, healing items, light sources, and more. Story-driven content has branching mini-narratives depending on how you handle each situation, favoring both pacifists and brute-force fighters. Other times, you can ignore certain enemies and creatures entirely. You are not alone in the world, but everyone is as desperate as you are, and will only kill you if provoked. If you tread carefully though, and get the right upgrades, you might be able to get through the night without raising a finger against your foes. It’s a great melding of combat oriented horror and defenseless horror, all tied together with an intriguing narrative that I won’t spoil.

The game also looks great, going for a more Deadlight-meets-Silent Hill aesthetic over the more animated styled survival games like Don’t Starve and Sir, You Are Being Hunted. Everything feels like it was made from old photos and color stains instead of pen and paintbrush. The top-down perspective constantly reminds you that your cone of vision is limited, forcing you to frequently turn around nervously. It also gives you the unsettling view of whatever demented beasts are at your heels. The concepts of light, perspective, and visibility are used brilliant here, and also provide a natural barrier that can be passed later on once you have acquired enough resources to venture deeper into the woods where no sunlight breaks through the canopy.

Really, the only criticisms I can levy right now is that the game is very clearly in Alpha, in that it is far from ideally optimized and a large amount of the final content is clearly still being planned and developed. What’s here is good, but don’t expect a finished product if you make the jump for the Early Access version. Other than that though, Darkwood is a fantastic little indie game and considering how good it’s been in Alpha, I can hardly wait for the final release. If you have any interest in a horror game with teeth and real scares, keep your eyes on Darkwood.

This preview was conducted with an Early Access code provided by the developer.