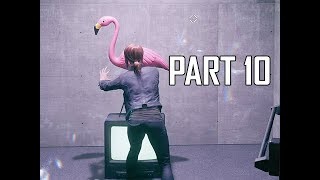 Control Walkthrough! Walkthrough and Let’s Play Playthrough of Control with Live Gameplay and Commentary in high definition. This Control walkthrough will be completed showcasing every level, mission, boss, and story ending.

Story:
Control revolves around a clandestine United States government agency known as the Federal Bureau of Control (FBC). The FBC’s goal is to contain, study, and ultimately control objects and phenomena which defy scientific law. To that end, they seek out paranormal phenomena on a national scale, including “Altered Items”, ordinary objects acted upon by otherworldly forces, and “Altered World Events,” or AWEs. Certain Altered Items are known as Objects of Power cause AWEs, and can be used in-game to gain new abilities. The FBC contains Altered Items within the Oldest House, a featureless Brutalist skyscraper in Manhattan that acts as the agency’s headquarters. The Oldest House itself is considered a “Place of Power,” and is vastly larger on the inside than on the outside, breaking the laws of reality. The Oldest House is connected to alternate dimensions which are studied by the FBC. Otherworldly forces leak into the Oldest House, including the Hiss, an unidentified force which acts as Control’s main antagonist. During the events of the game, the Hiss invades the Oldest House and the FBC, and Jesse Faden is tasked with regaining control of the supernatural building and restoring order to the Bureau.