Justin Amirkhani, the creative director at studio Vagabond Dog, took some time from his schedule to answer some questions about his studio’s game, Always Sometimes Monsters.

Can you give us some background on yourself and your studio?

How did you come up with the name Vagabond Dog?

[JN]: Well, Jake’s a big fan of dogs. I spent some time as a vagabond. Thus, Vagabond Dog.

How close do your in-games versions represent the real team?

[JN]: The conversations are all based on things we’ve talked about in some form or another, there’s obviously some concessions made for flow and comedy but they’re real enough.

Do you really drink that much coffee?

[JN]: Yeah, at some stages of development I’d be at Tim Hortons every night, all night. It was a surprisingly good place to work at. Uncomfortable seats and lots of weirdos. 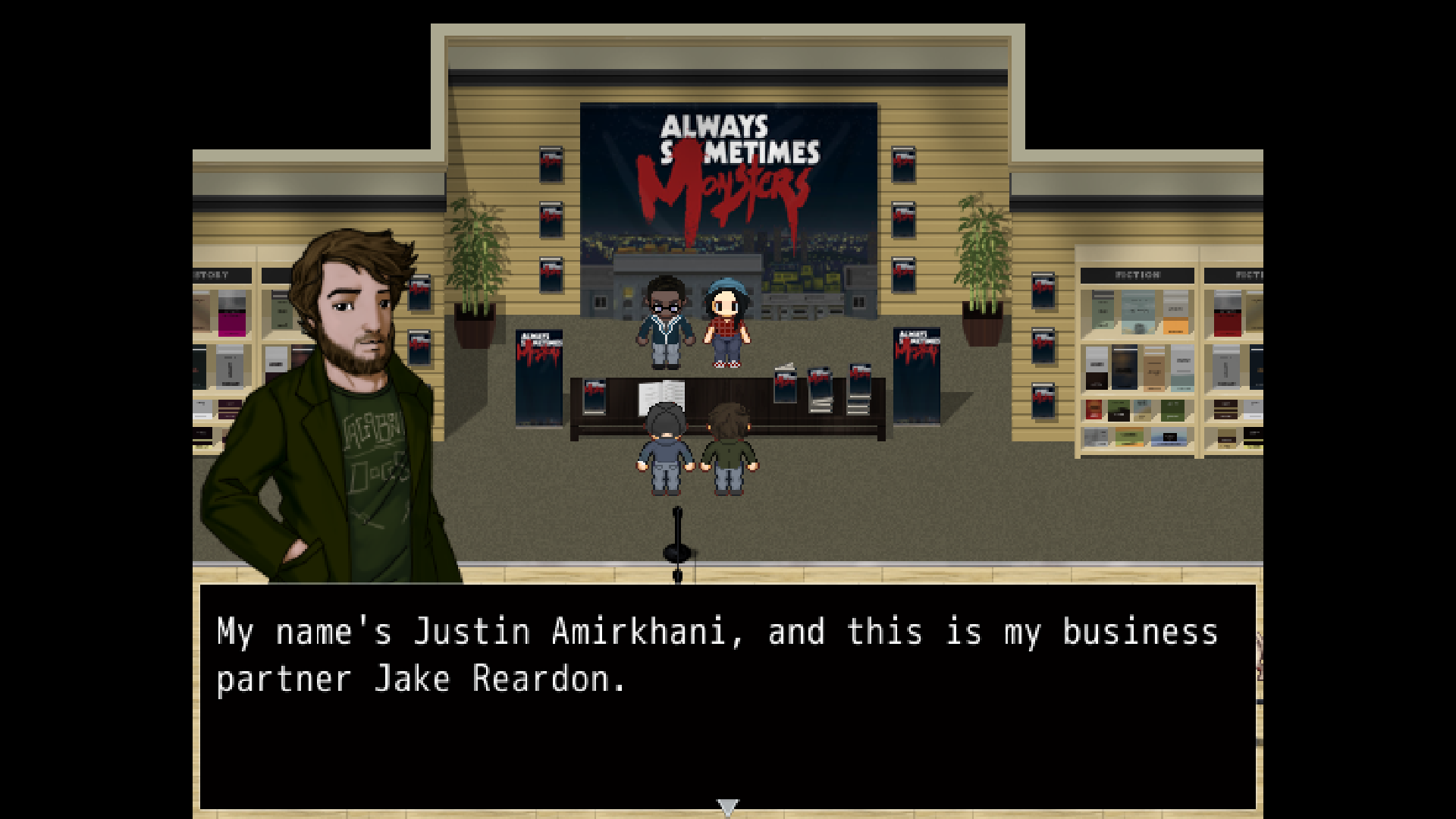 Were there any main inspirations for Always Sometimes Monsters?

[JN]: There are a few games that influence particular scenes, but on the whole it’s just our own experiences in life that provide the strongest influences.

What is the meaning behind the title?

[JN]: It’s something best understood after you finish the game, I suppose. In summary though it’s, I guess about how we are incapable of avoiding acting pure evil at some point in our lives. There’s always the possibility, but we don’t know at what point in our lives that will be.

Was there any purpose you had in mind when creating and developing this game? A message or story you hope to get across?

[JN]: Fundamentally, I wanted to help remind people how important it is to think of your choices. I do believe that games present a wonderful opportunity for people to simulate choice, and we can learn a lot from this. This game is just what choices seemed interesting or fit well or were personally relevant, all strung together in a story.

Your game does not shy away from mature topics. Rather than just mentioning them however, you sought to explore and delve into the topics. How come?

[JN]: Because a lot of those topics impact us in our real lives. All the messy stuff from in the game is real and out there, people experience it. This is a game about life, and to shy away from the parts that make people uncomfortable is to make a game about idealized life.

Were there any particular challenges in presenting and dealing with these topics?

[JN]: Absolutely. It’s not fun making this kind of content because you have to be aware that it’s possibly going to hurt someone or it is born out of some form of pain. When that pain is personal, it’s a h*** to go through it again to get it out on the screen.

I like how in some cases, the game does not come down on one side of an issue, rather leaves it up to the player to ponder what they would do.

[JN]: That’s because the point of the game is for you to decide what’s right and wrong. We’ve had some flak for not taking a hard stance for or against certain things, people don’t like the fact the game isn’t telling them that racism is bad, or that unions are evil. The game leaves it up to people to make these assertions and opinions on how the game handles the issues more often than not have to do with the individual’s ability to reconcile with their own beliefs because the game itself is faithless.

I liked in the beginning how you could choose your character from a number of people. Was this a personality or prejudice test of some sort? And if so, what does it say about me that I went with a young Asian woman?

[JN]: Honestly, I can’t tell you anything about yourself based on that choice but maybe you can figure something about yourself out if you think on it long enough. Really the whole thing is just there as a means of providing the character options in a new and novel way that gets rid of ordering bias (a problem with drop-down menus). We didn’t want to have a default option, so this was our solution.

From my experience with said character, I noticed several interactions with NPCs that I imagine would play out differently with a different character. What was the purpose behind this?

[JN]: The point of this feature and really most of the design of the game is to allow the player a completely unique experience. We wanted as much variance as possible in the game so that people could compare experiences with others who have played it. Doing this is a big part of how you “play” the game.

Was there a certain reason in having the player being a broke writer of all professions? Because I can relate to that all too well.

[JN]: It’s because it’s something I also relate to, having been a writer through my life as well.

I think having these nice character portraits juxtaposed to horrible actions, topics, and speech enhances the game. Was there a distinct decision behind using RPGmaker?

[JN]: We started with RPG Maker because it was quick and easy to prototype one. This is our first game and we haven’t had a ton of experience in other engines etc, but RPG Maker had everything we needed to get up and off the ground quick. By the time the prototype was done we decided it was a decent fit for what we wanted and just kept working with it.

Are you surprised by the players seeming to embrace the game and have dialogues about the game?

[JN]: Yes and no, I suppose. We knew we had something special from early on and that a small group of people would likely gravitate toward it because it’s got a lot to talk about. However, we didn’t really anticipate the numbers of people that would come when we released. It’s remarkable just how in-depth some people have gone with the game and we’re still finding new conversations starting about previously undiscovered elements of the game. 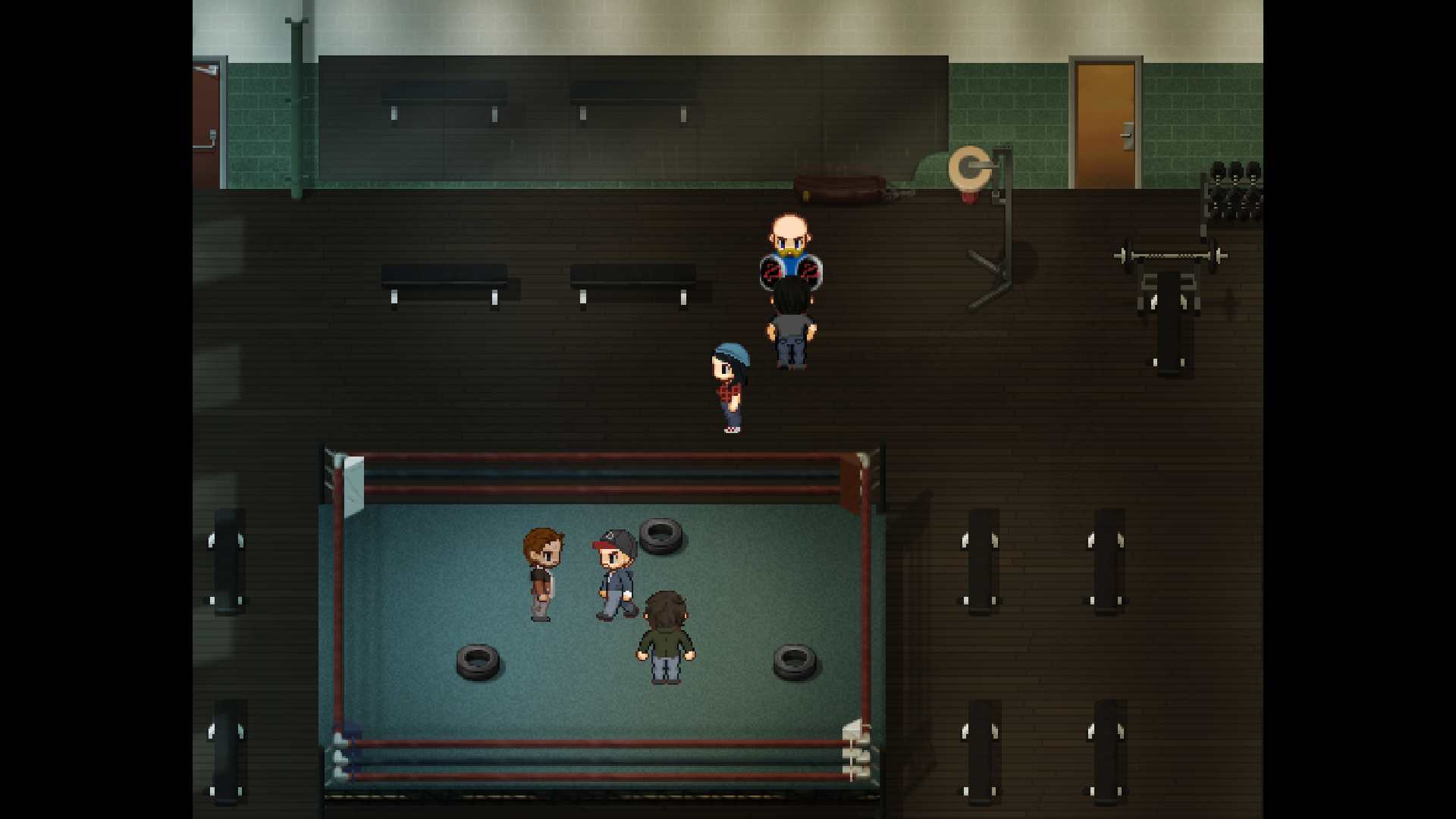 I liked the secondary plot that is used as a framing device and a bookend to the player’s narrative. What were you thinking or trying to accomplish when using the framing device in the beginning to set the game in motion?

[JN]: The bookend pieces are about determinism and causality. I think this is the part of the game people have the most issue with because they believe the game is about choice in the sense that choice should deviate your story wide enough so that the outcome of your life is vastly different from what you’ve been told is predestiny, but that’s a mistake.

Our intro/outro pieces are about choice in the sense that choice itself is a paradox when we live in a causal universe. Games are inherently confined and so this is the game being self aware of it, working with it as much as it can. I think in time, it will make more sense.

Regarding the “never-ending” ending, what was the idea behind it?

[JN]: There’s a two-fold reason for the epilogue, only part of which I will explain here.

In ASM the player commits what we call “original sin” in the Love Interest’s house during the second flashback dream. Here we see the actual history of the player forsaking their partner and friend, signing the deal to shut out Sam. The player has the freedom not to sign, keep life static where they are and just live in infinity doing nothing important/worthwhile. All of which is broken when the player signs, thus creating the entire adventure of ASM.

The ending is a return to this state having concluded the adventure. All the debts created in the process have been paid, we return to the static normal life we tried to escape from, maybe a little wiser. It never ends because that loop is life, unimpeded by ambition or greed.

The second reason is purely technical, and time will reveal why it’s there.

Have players uncovered all the endings and secrets yet?

[JN]: We can’t say as we don’t really track things, but so far we have not seen conversations for a number of interesting bits in the game.

Do you have any plans for future games at the moment?

[JN]: Yeah, we have ideas for new games all the time, and it’s a pain knowing we’ll never get to do them all. We’re working on some new stuff at the moment, but right now there’s nothing terribly thrilling to share.

Any planned updates or changes for the game?

[JN]: We’ve been patching the game and updating things casually since launch while we work on that aforementioned something we’re not able to share right now.

Do you believe we are Always Sometimes Monsters?

[JN]: We are all things at all times. Humanity cannot be reduced to a clever phrase.

Any comments or thoughts you would like to add or a question for myself or our audience?