User Generation looks at people who use video games to create something for themselves. The subject for this week in Samuel Villarreal, a well-established figure in the DOOM community who found his way into professional games development.

“Since kindergarten, I’ve been fascinated by mazes,” Samuel tells me. “I was very intrigued by the complexity of mazes visually, and instead of drawing kiddy pictures like every other normal child, I was drawing mazes and enjoying seeing others attempt the mazes I drew.” Clearly, it’s no coincidence that Samuel developed an interest for making custom levels for seminal FPS DOOM, a game that is often compared favorably to the linear FPSs of today thanks to its labyrinthine level design.

It was when he found a copy of a guide to creating new maps for DOOM in a local bookshop that Samuel began to transfer his map-making to video games. However, he was unable to make maps at that time since he was without a PC. “Instead, I continued to draw top-down sketches of maps—as they would appear in DOOM’s automap—during my free time. Then, when I did get my computer back in late ’99, I began my quest to learn how to create custom maps.”

However, he didn’t start with DOOM. Instead, Samuel began experimenting with QOOLE, a level editor for Quake, a new competitor to DOOM that offered full 3D graphics. “Quake was the first game I ever attempted to make custom maps for, and it was a very rough learning experience for me,” Samuel says. “I found Quake mapping a little bit too technical and felt overwhelmed at first.” Soon, he returned to DOOM and began making some real progress into understanding how the game worked and what he could do with the tools available to him.  “Mapping for DOOM was a lot easier to grasp and eventually helped me gain a lot of technical knowledge of how game engines work.”

Once he understood how to use an editor to build DOOM levels, Samuel decided to go a step further and start really getting to know the game intimately. “Basically everything I’ve gained and learned was from toying around with DOOM,” he tells me. “It’s like a technical sandbox for me.” He certainly learned a lot from it, as he went on to port the fan-favorite DOOM 64 to the PC. It’s this sort of technical know-how that, combined with the maps that he made for a range of games including Serious Sam and Unreal Tournament ‘99 as well as Quake and DOOM, that landed Samuel a job at TimeGate Studios in 2006.

“It was by accident, actually,” says Samuel when I ask him how he made the transition from hobbyist to professional. “Before TimeGate I worked for a help desk company and my contract was up. I found TimeGate’s website while searching for jobs online and learned that their offices were just a few miles away” Coincidentally, he was also messaged by a poster on one of the DOOM forums that he was a part of encouraging him to apply for the job based on the strength of his maps. That poster turned out to be a designer from TimeGate. “I didn’t really expect them to respond, but they did, and just within a few weeks I was hired.”

Samuel tells me that his process for map building varies from project to project. “It really depends what mood I’m in,” he says. “Usually I would draw a sketch of what the map would look like in the automap on paper, similar to how I used to draw maps in my younger days.” As a child, Samuel would draw Megaman stages, but when he discovered DOOM he was inspired to draw top-down maps rather than side-scrolling levels. His process has evolved a great deal since then, but it’s interesting that he himself can trace a direct route from the idle doodling he did in his school days to a professional career making video games.

Working in the industry gave Samuel the opportunity to absorb new ways of creating, too. “A method that I learned at TimeGate is to construct a rough outline of the level without any detail work, sectoring or texturing. Basically, prototyping to get an idea of the size of the level, how progression feels and if the area feels fun or not.” Taking this less structured approach to its natural conclusion, Samuel also mentions that from time to time he’ll go completely freeform with his designs, simply building on the fly. “It’s actually faster to get stuff done, but it usually results in going back to redo things and a lot of time spent deciding how I should connect areas together.”

Plenty of people make their own content for games as an attempt to get their foot in the door in the industry. However, whilst Samuel did indeed end up working for TimeGate, it wasn’t particularly his intention to pursue video game development as a career. “I originally wanted to get into the IT industry,” he says. “But, to be honest, I never really had a clear path decided on.”

After several years working at TimeGate, Samuel decided to call it quits and is now producing mobile apps, something that he says he is enjoying far more. “The games industry is extremely volatile and competitive. To me, it just doesn’t seem like it’s worth pursuing.” However, that’s not to say that he looks back on his time in the industry as time wasted – in fact, far from it.  “The way I see it, any experience that I gain will be out to use in whatever opportunities I have in the future.” 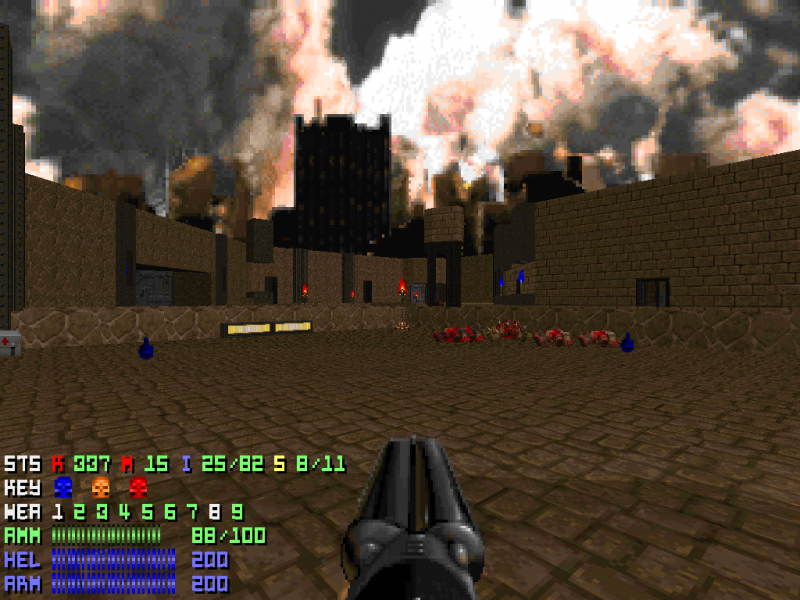 For now though, Samuel is content to continue game design recreationally. “I’m satisfied doing level design and programming as a hobby,” he tells me. “This way, I’m in full control of what I do.” And, it seems that amongst projects including a custom engine intended for use recreating Turok: Dinosaur Hunter for the N64, a return to DOOM is on the cards for Samuel. “I’ve been longing to make more levels for that game,” he says of the title that got him into video game modding and in turn, video game design.

Whilst Samuel may have found that the video game industry wasn’t the best fit for him professionally, the fact that he managed to turn a hobby into his living is something to be congratulated. Moreover, the fact that he still has a passion for DOOM speaks volumes about both the game itself and the community surrounding it. The community that surrounds DOOM is still thriving, even some two decades after the game was first released, and it’s clear that they have an appreciation for Samuel’s work based on his successes at the Cacowards, an annual celebration of DOOM creations—and surely, they’ll be eagerly anticipating seeing what Samuel comes up with next.